It’s rural Alabama in the late Fifties, and little Lewellen (Dakota Fanning) is feeling pangs of sexual awakenings. Unfortunately, the prepubescent adolescent is being raised by her Bible-thumping grandmother (Piper Laurie) whose repressive rules has the curious tomboy spending most of her free time out of the house.

One of her escapes is to her alcoholic father’s (David Morse) rundown shack located at the other end of the property. The problem is that her pappy is an abusive, mangy mutt of a man who has never amounted to anything. He mostly mopes around in bed all day, waiting for a visit from his victim-type girlfriend (Robin Wright Penn).

Early on we learn that something bad must have occurred between dad and daughter, because Lewellen informs her pal Buddy (Cody Hanford) of her plans not only to kill her father but to neuter him as well. Another hint that she might have been molested is that she pressures Buddy to expose himself to her for a kiss. 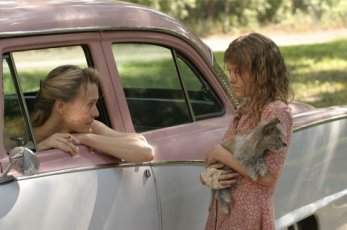 Lewellen’s only healthy outlet seems to be singing, since she’s in love with Elvis Presley (Ryan Pelton) and not at all shy about belting out any of The King’s greatest hits, like Hound Dog, Heartbreak Hotel or Can’t Help Falling in Love, even though that song won’t be released until the next decade. Anachronisms aside, the plot thickens when an offer of a free ticket to an Elvis ends in a violation. The tragedy easily eclipses Lewellen’s other personal setbacks, such as her father’s being struck by lightning and Buddy’s head being turned by the cute rich kid (Isabelle Fuhrman) who just moved into the mansion next-door for the summer.

Thanks to the compassion of a kindly black caretaker (Afemo Omilami) who moonlights in a loft band with Big Mama Thornton (Jill Scott), it isn’t long before Lewellen lands on the road to recovery. Too bad the picture simply isn’t very convincing in selling the idea that an easygoing philosopher’s waxing romantic about the meaning of life and music might be sufficient to heal the psychic scars of a child left traumatized by rape.

An ill-advised variation on Black Snake Moan touting loss of innocence as a source of inspiration.

Rated R for sexuality, ethnic slurs and the rape of a young girl.

To see a trailer for Hounddog,