Cerebral stuff like Einstein’s applied theory of relativity and unexplored innerspace, don’t exactly seem like ideas for kids to mull and enjoy in their movie-toons. But we’re talking Dr. Seuss here, aka the legendary Theodor Seuss Geisel, the late creator of forty-four enduring children’s classics including The Cat in the Hat, Green Eggs and Ham, and How the Grinch Stole Christmas. And it’s no stretch to credit Seuss with that unique bilingual talent for communicating effectively in kid rant and adult talk in the same sentence.

Now Dr. Seuss’ distinct magical knack for that double decker dose of figuring out the mysteries of the world that can make perfect sense to both children and their parents in totally different ways, is morphed into CG animation on screen in Dr. Seuss’ Horton Hears A Who! And with more than a little help from prankster cartoon co-conspirators Jim Carrey and Steve Carrell. 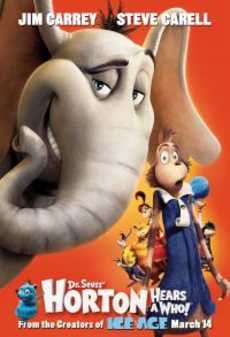 Carrey is comfortably at home in his brand new skin here as Horton, a chatty jungle elephant whose serene slacker creature world is shaken up when he believes he’s discovered a microscopic civilization called Who-ville, existing atop a pink clover. And their cry for help as they fear their tiny world is spiraling into extinction, thrusts Horton into social activist mode and his animal instincts into high gear, while making him the butt of jungle wisecracks. Along with incurring the wrath of the snooty tropical matriarch Kangeroo (Carol Burnett), who functions as the self-appointed community conformity police presiding over a cartoon world inquisition targeting Horton, while homeschooling her own offspring in her pouch to protect them from destructive social influences at odds with her own parental dictates.

Meanwhile, the Mayor of Who-ville (Steve Carell) – who already has enough problems with 96 daughters, one son and a single bathroom to share – is alienating his own constituency by insisting there’s a parallel jungle universe in the great outer beyond. Even as Horton is denounced as a menace for advocating for the existence of innerspace and encouraging small children to enlarge their imaginations – in contrast to the large adults with small minds all around them.

Horton Hears A Who! does now and then threaten to teeter off the brink into its own gabby alternative universe, ‘tooning away into discourses on metaphysics and cranky governments. And the effort to draw kids in and hang on to their limited attention spans by going to the opposite extreme of periodic indulgence in conventional crackpot cartoon silliness, just doesn’t coalesce.

But a solid kid-relatable focus on issues they can understand, like an openness to the world of nature, oppressive peer pressure, and periodic nitwit parenting that could sure use some advice from the offspring occasionally, is pure Seuss, with plenty of Flower Power to spare. Not to mention that when paying attention to all the possibilities of this planet and beyond, size indeed matters.