Big budget blockbusters these days are playing out less like adventure stories on steroids, than a mass murderer’s wet dream, and Guillermo del Toro’s Hellboy II: The Golden Army seems to be no exception. So with the continued existence of an equally belligerent humankind at risk when the mystical world in a parallel universe goes into homicidal revenge mode, my instinctual response to all the mandatory bloody mayhem as usual is, sorry to say, who cares?

Galloping along at its attention deficit disorder pace, Hellboy II’s details are flung at the audience on perpetual fast forward, stopping briefly along the way for the usual overly efficient endless succession of blood splattering, bone crunching mini-climaxes, in addition to funny punchlines that distract more than enhance. And as the plot drifts around the comical carnage in between the cracks, we learn that Prince Nuada (Luke Goss) is mad as hell at the human race for ruining the planet. After taking down his own dad, the peacenik king of the mythical world, the prince conspires to assemble and deploy his Golden Army against humanity. 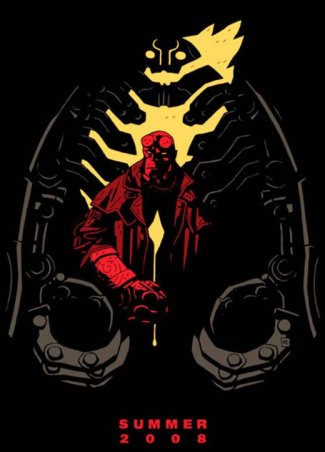 Enter Hellboy (Ron Perlman), that ranting, beer guzzling gym body with castrated horns and receding hairline, to protect humankind against this assault, and in league with the Bureau for Paranormal Research and Defense in Trenton, New Jersey. At the same time, Hellboy’s main pyrokinetic squeeze Liz (Selma Blair), is all fired up in more ways than one, when she discovers she’s been knocked up by the horny dude minus his horns. Not to worry, the incidental baby daddy won’t let pending fatherhood cramp his style, as he goes toe to toe at hyper-decibel noise rackets with assorted nightmarish creatures too numerous too mention in a mere movie review.

Del Toro’s sequel followup adaptation of the Mike Mignola comix four years later is infused with the creative guru’s unique imaginary world blending the fantastical and frightening. But his main competition here is not so much with an antagonistic magical species, as with the special effects whiz kids back in Hollywood who simply upstage any bid for engaging or original storytelling. Not to mention that following a theatrical rendezvous with Hellboy II, the post-traumatic stressed out audience may feel more beaten over the head and battle fatigued than the movie villains.

*Prologue: A special introduction to the DVD from director Guillermo del Toro.