I first became aware of Philip Glass when I saw Koyaanisqatsi (1982), the otherwise silent cinematic tribute to nature for which he wrote the perfect score. Now in his seventies, this master modern classical composer remains as driven as ever to crank out his experimental operas, symphonies, movie and dance scores and more.

This eponymous bio-pic exposes the man to be a recluse who compulsively divides his time between music and meditation, which might not be a problem except for the fact that he has a couple of young kids with his fourth wife, Holly Critchlow, a cutie pie who’s about half his age. She has a meltdown about midway through the movie over the realization that they want different things out of life.

It seems that she’d like for him to be more involved with the family, while he can’t pull himself away from the piano and sheet music, which are obviously not merely his passion but serve as his therapy as well. At least the couple have a summer home in Nova Scotia, so the children don’t have to stay cooped up in an apartment in New York City, although even while on vacation, their daddy continues to work non-stop. 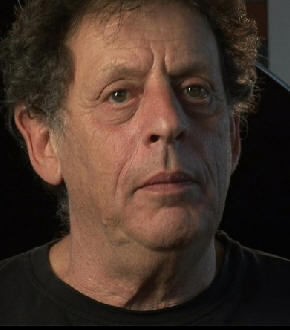 We do learn that, once a year, he takes a day off for an annual trek to Coney Island to ride the Cyclone, the ancient amusement park’s mammoth roller coaster. We also see that like a lot of self-absorbed geniuses, he’s given to eccentric (hates overhead lighting) and misanthropic (could careless whether he’s appreciated) tendencies. This means he’s adamant about using desk and table lamps and is perfectly content if those who don’t like his music pass on it and go listen to someone else.

Too bad he just can’t spare sufficient quality time to satisfy his offspring and troubled spouse. An intimate peek into an elite mind, warts and all.