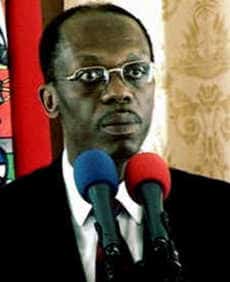 If you want to get an idea of how much gangsta rap has influenced cultures elsewhere around the world, check out Ghosts of Cite Soleil, a revealing documentary about a bloody turf war inside a notorious Haitian slum. What makes this movie compelling is that the leaders of the competing posses, Tupac and Bily, are also blood brothers. And on top of that they are both in love with the same girl, Lele, a French missionary with an incurable case of Jungle Fever for bad boys.

The film unfolds against the backdrop of the impending fall of the Jean-Bertrand Aristide regime, which is of considerable significance because the gangs are operating with the tacit approval of the outgoing president. In fact, these sadistic goons openly brag on camera that they’ve been armed by Aristide to intimidate and eliminate his political enemies, which might explain why the Marines later land to restore a little law and order. 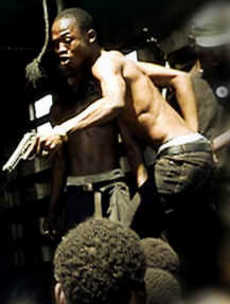 The screen is filled with unoriginal wannabes sporting nicknames right out of rap videos, such as Tupac and 50 Cent. Where have I heard those before? And like the icons they adore, they dream of shooting their way out of the ghetto and leaving the life of crime behind to become famous hip-hop stars. Meanwhile, their behavior mimics that of their heroes which means mostly murder, misogyny, weed, profanity and the N-word. At one point, Bily even says of his own sibling, “If Tupac weren’t my brother, I’d kill him already.” Charming.

The only person who seems perfectly safe is the two-timing white woman all the brothers are lusting after. She eventually gives her heart to Tupac and then puts all of her efforts into helping him escape the country. The plan is for them to settle down while he pursues his musical career. And although she succeeds in getting him out, Tupac soon misses the madness and makes the dubious decision to return to his ‘hood. 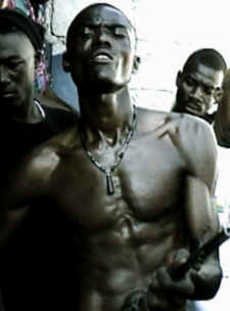 By the end, most of the people you’ve been emotionally investing in have either died or disappeared, except for gun moll Lele, of course, who had the sense to stay put in France. This gritty flick was produced with the help of the most famous Haitian hip-hop entertainer around, Wyclef Jean.

Fascinating stuff, but this portrait of these scary “altar boys” is probably the last thing that Haiti’s Board of Tourism wants to see in circulation.

In Haitian, French and English with subtitles.