With the cult of cruelty wallpapering the mass media more than ever before, and everything from murders, wars and celebrity breakdowns as lowbrow spectator sport entertainment, it was only a matter of time before the cinema of sadism would seek a new, virtually untapped market among the egghead arthouse crowd. And now that German born writer/director Michael Haneke and his warped imagination have ventured into that virgin territory with Funny Games US, the remake, the stampede is on. Or so it would seem.

Film critics, whom one would imagine would know better, have apparently lost their minds over this movie at the moment. Or at least hastily set aside any sense of professionalism and even moral decency, as they’ve shown up at preview press screenings for Funny Games in droves, with lines snaking around the block, to partake with great gusto and hearty cheerful enthusiasm, in the ambulance-chasing style morbid pleasures of observing a family, however fictional, being tortured nonstop on the screen for two hours. 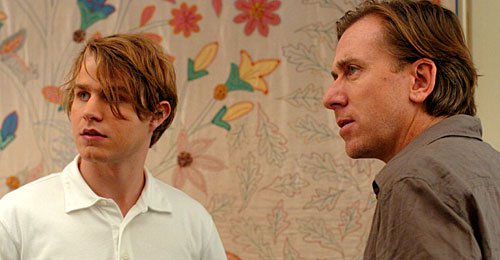 Haneke decided to remake his original Funny Games, which came out in 1997, for reasons which are unclear, considering that this production remains nearly intact. Except for a new cast of characters, relocation of the setting from Germany to Southampton, Long Island, and a notably passive male head of household victim and contrasting take charge, more aggressive housewife. The director has mentioned in interviews that he had really intended his first film to be made about America, because of the greater inclination of US movies to revel in violence as entertainment.

As Funny Games begins, the affluent Farber Family, George (Tim Roth) and Ann (Naomi Watts) are headed by car to their remote palatial vacation home with their young son, Georgie (Devon Gearhart). While father and son tidy up the family fishing boat at their private dock, Mom makes preparations for a dinner that night with visiting neighbors.

Ann’s kitchen duties are suddenly interrupted by the appearance at the door of an odd preppie young man dressed in a golfing outfit and white sports gloves, and with impeccable formal etiquette. Peter (Brady Corbet) asks to borrow four eggs at the request of a neighbor he claims to be visiting, then proceeds to drop and break the eggs, and ask for four more. Soon Peter is joined out of nowhere by his identically attired and likewise strangely verbally polite pal, Paul (Michael Pitt).

When the peculiar pair becomes increasingly demanding and refuses to leave, a confrontation with the couple ordering them to do so leads to an ugly hostage situation, and escalating degradation, violence and psychological torture for this unfortunate family. And the two patrician young men never lose their soft-spoken cool, while casually applying the most despicable forms of suffering and humiliation to these random, doomed victims.

The emphasis is clearly on torture for sport, given the athletic attire of these elite thugs, and their favored wielding of golf clubs as potential deadly weapons. And their stated intentions that the rules of the ‘funny games’ in progress consist of whether or not the family members can prevail and avoid death at their hands, by managing to survive until morning.

There’s also the implied intended collusion of the audience, devised by a mischievous filmmaker not without his own culpability in this extended atrocity, in a kind of depraved spectator sport. And sorry to say, the assembled film critic viewers at the screening I attended, appeared to themselves be taken agreeable hostage with pleasure and even laughter, for the ride. Will the real monster stand up, please.

This sort of having-your-cake-and-eating-it-too indulgence in torture porn, however arty, while pretentiously and simultaneously implying a vague critique of the proceedings, is nearly as repulsive and pointless as anything observed on the screen. Is Haneke suggesting deadly home invasion with its initial, deceptively gracious diplomatic overtures, as symbolic of imperialism? If so, there’s not much merit to that premise, as the perpetrators and victims alike are all upper class. Perhaps the most striking irony at work here, is that the wealthy have devised all sorts of technical measures and gadgetry like elaborate electronic gated communities to protect their interests, but in doing so may also be trapping themselves within, in a crisis. Well, so what.

The idea itself for Funny Games, though, is not necessarily far fetched. The most notorious patrician killing spree on record, that of Richard Loeb and Nathan Leopold Jr. who kidnapped and murdered a child in the early 1920s simply for thrills, subsequently inspired two movies, Compulsion (1959) and Swoon (1992). But Funny Games sheds no new light in this arena on either the complexity of pathological human relations, or psychological depravity.

Hopefully Funny Games is not indicative of a new trend where the arthouse crowd gets their own stylistically upgraded B slasher fare too. That ominous cruelty-is-cool, polite homicide-is-hip mentality is nothing more than a new low in the movie world.