If the cold winter weather has you shivering in deep freeze, there’s a movie out there right now to match your mood, and send a very different set of shivers up and down collective audience spines. A horror film without a hint of monsters or homicidal glee, Frozen’s primarily sedentary scare tactics may have you opting to hibernate the rest of the winter indoors. Though a famished supporting cast of a wilderness wolf or two on the prowl, could at least warmly satisfy the shotgun toting spirit of Sarah Palin.

It’s skiing season up in New England, and three local college students head for the slopes. But lacking sufficient funds to pay for admission, Dan (Kevin Zegers), with the encouragement of flirty best friend Joe (Shawn Ashmore), pressures his girlfriend Parker (Emma Bell) to con the geeky chairlift operator into letting them board with less than the required fare, by loosening her snowsuit and exposing cleavage. And while the hustle works on the semi-smitten guy, though much to his dismay after he realizes she’s already got a boyfriend with her, the trio have apparently paid for more than they bargained for. Because when summoned to a unscheduled conference with his boss, the operator inadvertently leaves them dangling in a chairlift up in the sky, while the lodge shuts down for five days until the following weekend. 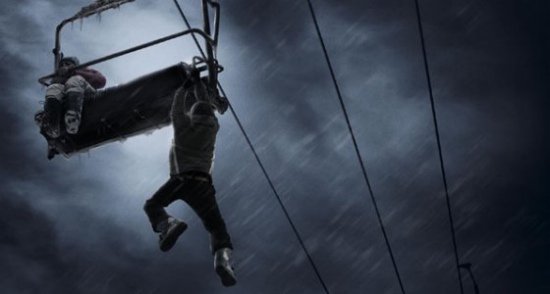 With temperatures dipping way below survival limits and hungry wolves howling below, the freaked out friends at first descend into denial mode, while contemplating as if from comfy stakeouts in front of a fantasy lodge fireplace, what might have driven the Twin Towers victims to leap into the void rather than choose death by inferno. And as the potential variety of emergency exit strategies and mode of death choices alike – from slow sitdown hypothermia and quick jumper potential suicide into raw wolf dinner – seriously diminish, the unfortunate doomed humans progress through a series of desperate when not despairing psychological states. Including mutual bonding and unbonding pertaining to longstanding resentments and rivalries, frostbite facial flesh removal, panic over a house pet left behind who may consequently end up starving to death, and the heartbreaking humiliation of having no choice but to relieve oneself on a bench shared with comrades, when a concept like social etiquette has since vanished.

As much horror as psychological thriller, Frozen is elevated in more ways than one, high above the usual genre gore menu, with its thematic originality and emotional depth. And a knack for unmercifully cutting through the fourth wall and related audience comfort zones, while connecting character terror and tragedy with a no longer securely distanced viewer sympathy for screen victims. In other words, you’re there in that chairlift with those tragic characters whether you like it or not, dying every inch of the way with them.

And if you think the scariest thing about skiing is the ride, think again. Frozen: Best not to panic, but don’t think about chilling out either.