In American movies, with rare exception to the rule, the focus is on characters living out their personal lives no matter how volatile human history may be, swirling all around them as simply wallpaper. Director Andrea Staka turns the tables with Fraulein (Das Fraulein), a tense yet lyrical psychological drama revealing in myriad subtle ways the brutal effects of extreme historical shifts, war and the traumatic aftermath of cultural displacement on three generations of women from the former Yugoslavia. And she accomplishes this without a single frame depicting historical cataclysm, yet where the past is always present even in life’s most intimate and private moments, as that inescapable elephant in the room.

This Swiss/German co-production set in Zurich begins with the daily routines surrounding the bland, bitter life of fiftysomething, no-nonsense small businesswoman Ruza (Mirjana Karanovic). A Serbian immigrant several decades ago from the former Yuogslavia, Ruza admits to a satisfying and comfortable life back home, but she longed for the rumored promise of lavish materialism in the West. 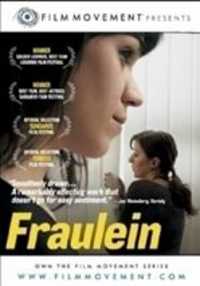 When her boyfriend abandoned his pledge to join her in Zurich, Ruza transformed into a withdrawn, callous workaholic as a substitute for an emotionally fulfilling life, saving pennies to set up her own modest cafeteria where she behaves harshly towards her fellow immigrant kitchen staff. Among them is reticent elderly worker Mila (Ljubica Jovic), who is also saving pennies along with her husband to repair their war damaged home in Croatia, and hopefully return there one day.

In the midst of this dreary existence and daily drudgery, Ana (Marija Skaricic) turns up, an aimless young drifter living in the local bus station, who has recently arrived from Bosnia. When Ana stops by the cafeteria and rushes to the aid of Mila who has cut her hand, Ruza senses in Ana her own lost carefree youth that vanished long ago, and begs her to stay and work there.

Ana has her own dark secret that threatens to cut her life short. Along with a traumatized past as a victim of war, that has given her a compulsion to live as passionately as possible in the present and forget about obsessing over the future, unlike the other two women. And the intensity of her joy in experiencing each moment as if it were the last, however much based on denial of her own threatening fate, irrevocably changes the lives of these glum women who are into their own denial around savoring existence in the here and now.

Fraulein is a tender yet candid tale. And crafted with the minimalist, sensitive strokes of a female director who bypasses the usual offensive female stereotypes that prevail on screen, for transformative, engaging portraits of everyday women’s lives.