When Harold (John Cho) and Kumar (Kal Penn) burst onto the screen four years ago, we found the nerdy stoners careening all across the State of New Jersey in a weed-fueled haze on a munchies-craving quest to find a White Castle restaurant which was open all night. That irreverent road flick was a laff-a-minute riot funny enough to land on this critic’s Ten Best List for 2004.

Unfortunately, the same can’t be said for Harold & Kumar 2, a pointless downer which fails to measure up to the first either in terms of humor or taste. This is an excellent case study in a sequel’s simply increasing the sleaze factor while pay scant attention to virtually every other aspect of the production. 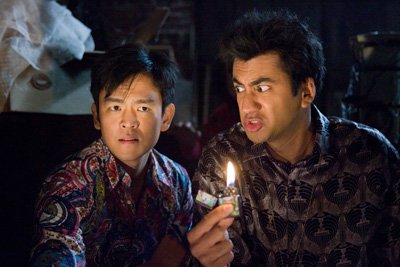 The picture’s troubles start with the replacement of director Danny Leiner with a pair of first-timers, John Hurwitz and Hayden Schlossberg. While Messrs. Hurwitz and Schlossberg did create the title characters and write the script for the original, they were very obviously in over their proverbial heads in taking on this new challenge.

Against their better judgment, they opted to skimp in terms of the casting, failing to ask such seasoned comics as Anthony Anderson, Fred Willard, Jamie Kennedy and Bobby Lee, and veteran crowd pleasers like Ryan Reynolds and Luis Guzman to reprise their roles. Another flaw lies in their editing which fails to replicate the first adventure’s madcap pace, almost as if they expect the production to pass muster on the strength of the screenplay alone. 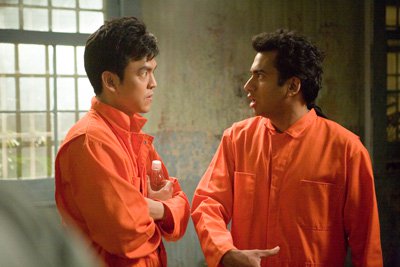 But these haphazardly cobbled together skits prove to be less than compelling. Consequently, Harold & Kumar Escape from Guantanamo Bay reads like little more than just a really raunchy variation on Cheech and Chong.

At the point of departure we find the pot-loving protagonists boarding a plane for Amsterdam where they plan to imbibe legally while looking for Maria (Paula Garces), the heartthrob Harold has been admiring from afar. However, when Kumar impatiently decides to get high in the bathroom, an already suspicious passenger mistakes his bong for a bomb. 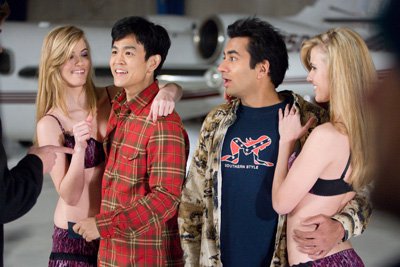 So, he and Harold are immediately subdued by federal air marshals who figure them for Al Qaida and North Korean terrorists working in concert. They are then shipped off to the infamous Guantanamo Prison, though they make a break for it when forced to fellate their guards. And the chase is on.

Next, they make their way back to the U.S. with the help of a boatload of Cuban refugees, and the balance of the practically-pointless plot puts the freewheeling fugitives in a series of sordid situations dreamt up by the mind of a demented degenerate. The humiliation endured by our hapless heroes ranges from finding goat poop on a pillow to having ejaculation shot into a face to being urinated on by Ku Klux Klansmen to something called a cock meat sandwich.

A crass, classic, take-the-money-and-run ripoff which squanders a golden opportunity to make a statement about racial profiling, the Patriot Act and the Geneva Conventions in favor of serving up a mindless teensploit laced with shockingly-graphic images.