If a big reason that people go to the movies is to escape the dreary reality of their jobs, then movies about the workplace should be at least a little more exciting than what is faced every day at the plant. And while the factory comedy Extract is laced with some chuckles thrown in to neutralize the nine to five numbing routine in that artificial food flavoring assembly line setting, spicing up this primarily bland concoction would require much more injected into the cinematic recipe, than one fairly far out pot interlude.

Written and directed by Beavis And Butt-Head/King Of The Hill mastermind Mike Judge, Extract centers around gloomy factory boss Joel, played by Jason Batemen, who’s enduring plenty of grief at the moment, and it’s got nothing to do with the recession. Besides getting no respect from his workforce, Joel isn’t getting any of something more intimate at home either. Unless he can make it home before 8pm, somewhat of a witching hour there, when his perpetually not-in-the-mood wife Suzie (Kristen Wiig) makes a point of tightening up the drawstring on her jogging pants faster than you can say chastity belt. Think un-kinky. 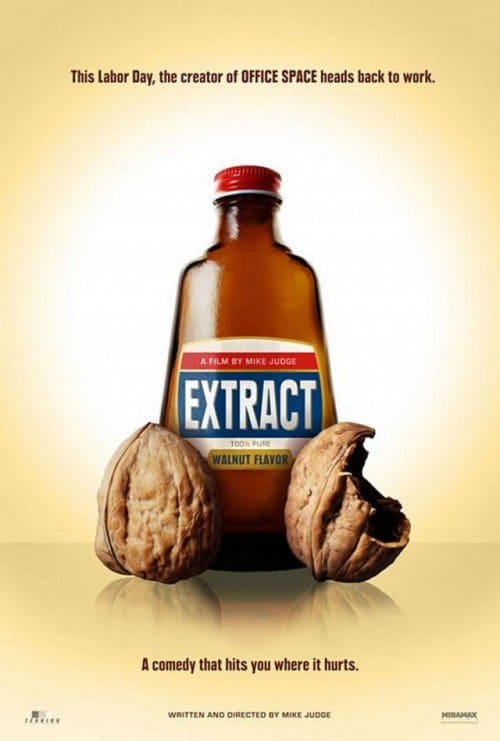 And since Joel seems to have serious separation anxiety issues when it comes to his workaholic tendencies, it’s no surprise that he experiences uncontrollable urges to make moves on the new femme fatale temp just hired, Cindy (Mila Kunis). Though Cindy may have designs of her own that have nothing to do with her job description but possibly related to a severed testicle or two. And for some strange reason, severed testicles seem to be a hot topic in movies lately, whether in war (Inglourious Basterds) or work.

In any case, on hand to offer radically unconventional tips on salvaging Joel’s sex life is bushy-beard best friend and bartender Dean, played in a cocky cameo by an unusually hairy Ben Affleck. Dean arranges, despite a pot-consuming haze, for a mentally challenged gigolo (Dustin Milligan) who makes house calls and takes referrals, to seduce Suzie so that Joel won’t, well feel too guilty about cheating on her with Cindy.

Filmed at a California water bottling plant, Extract suffers from the usual grotesque caricatures of the blue collar working stiff, perpetrated by outsider filmmakers who have never been one to make ends meet. As a result, there’s little grasp of what these situations are all about, or any emotional attachment to these thinly conceived characters or their inner lives.

A movie that would have been at least a little more upbeat than Bateman’s glum marriage, might have added more color to the proceedings, artificial or otherwise. And can we knock it off already, with that female Beavis and Butt-Head cranky assembly line duo in hairnets.