Returning to movies after a six year absence with a vengeance, so to speak, Mel Gibson stars as a mad as hell vigilante dad in the UK small to big screen adaptation, Edge Of Darkness, coincidentally penned by ‘The Departed’ screenwriter William Monahan. Though possibly less by chance is Mel’s bid to clean up his rowdy right wing, booze laced, less than family man image offscreen, by doing a beyond the call of duty Father Knows Best impression in a movie. Not to mention his unfortunate last appearance on screen prior to departing, as an anger management therapy patient in Paparazzi.

Gibson is, well, Craven in Edge Of Darkness, a glum Irish Boston cop, widower and recovering alcoholic drowning his sorrows in ginger ale placebos. When his MIT grad intern scientist daughter Emma (Bojana Novakovic) is murdered, the distraught Craven insists on taking charge of the case, over precinct brass objections. 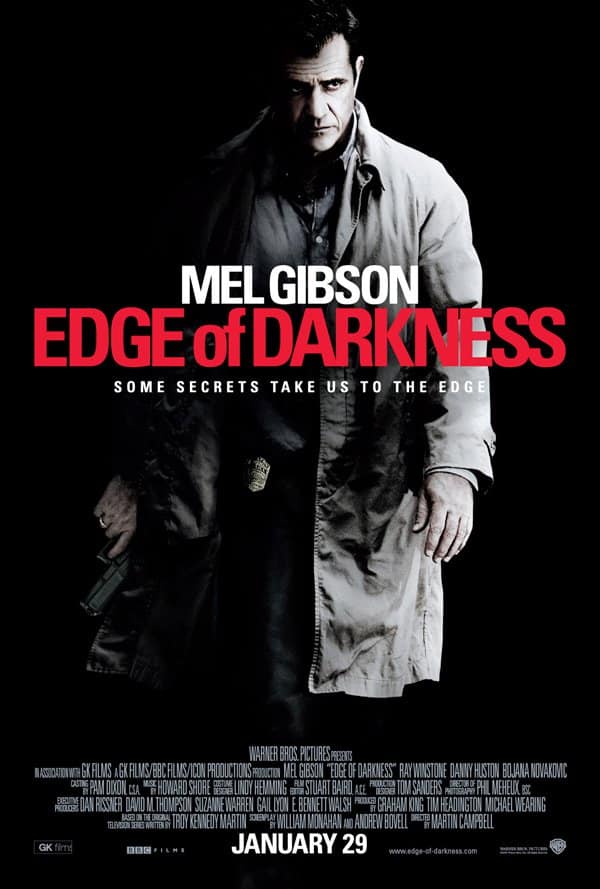 Nearly following in the footsteps of haunted screen dad Charles Darwin (Paul Bettany) in Creation, Gibson’s Craven is perpetually stalked by the ghost of his deceased offspring, even as he gets into fanatical stalking of suspected perps and victims alike. And always one step ahead of his clueless squad back at headquarters, Craven uncovers to his own amazement, simultaneous criminally minded, convoluted scenarios touching on conspiratorial corporate defense contractors, a nuclear facility roach motel where you can’t check out, covert dirty bombs, contaminated terrorists, radioactive milk and locks of hair, slain whistleblowers, and one particularly unscrupulous politician who just happens to be a Democrat. Along with a kindly ailing neighborhood hitman played by Ray Winstone, but who was originally supposed to be Robert De Niro until he backed out over creative differences.

While Gibson goes all out to do his superhero cop thing in Edge Of Darkness as conceived by director Martin Campbell (Casino Royale), his weary demeanor while making moves on villains in top fighting form, never quite makes it past a spectator gut feeling that the aging celeb is a bit too over the hill at fifty-four years old to pull off being convincing. While the multi-millionaire celeb’s poor imitation of a workingclass stiff with a bad Boston accent, doesn’t help either. To sum up, and which is why competing against yourself is rarely a good idea, Craven, you’re no Brave Heart.