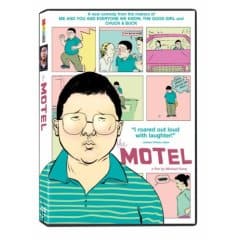 Ernest (Jeffrey Chyau) is a typical 13 year-old with raging hormones. But despite the onset of puberty, it doesn’t look like he’s about to find a girlfriend anytime soon. First of all, he’s overweight and Asian-American and living in a small town in upstate New York where most of the girls are white and won’t give him the time of day. Worse, he’s being bothered by bullies who refer to him by ethnic and sexual-preference slurs, even though he isn’t gay.

To top it all off, he has very little free time after school anyway, between his homework and having to help out with the family business. For Ernest is fatherless, and it is his job to clean rooms and make beds in the seedy motel run with an iron fist by his no-nonsense mother (Jade Wu).

Feeling his oats, the ever-obedient boy decides to assert a little independence from his mom. And it is the resulting strain on their relationship which sits at the center of The Motel. This unorthodox drama examines the rites of passage from a fresh perspective, namely, that of a Chinese-American adolescent.

Among the movie’s motley ensemble of characters is Sam (Sung Kang), a well-meaning guest who takes a liking to Ernest and offers to serve as a father figure. And then there’s Christine (Samantha Futerman), a patient 15-year old friend who sees Ernest as a little brother though he just wants her for her body.

Most of the action takes place on the grounds of the sleazy motel, run by the imperious Mrs. Chin with the help of a trusty baseball bat. Always worried about unruly visitors, she never considered that her own offspring might turn out to be her toughest challenge.

A bittersweet meditation on manhood deeply-rooted in Amer-Asian culture.

In English and Chinese with subtitles.

DVD Extras: Commentary by director Michael Kang along with his two co-stars, “Behind the Scenes” featurette, theatrical trailer, Palm previews and web links.