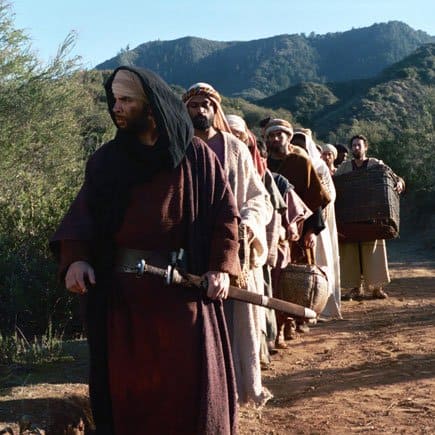 Was Jesus a black man? He might have been, yet Hollywood has never seen fit to make a movie featuring a sepia Son of God. Till now. Color of the Cross is the brainchild of actor/writer/director Jean-Claude LaMarre, a gifted tale-spinner who does much more here than merely revisit the life of Christ in blackface.

For this controversial reinterpretation of the scriptures, which transpires during the 48 hours leading up to the Crucifixion, LaMarre mixes many instantly recognizable Biblical passages with speculation about a motive for murdering Jesus which had to do with his skin color. So, superficially, Color of the Cross reads like a Passion Play except for the fact that Jesus is black, and that he has been rejected by disbelieving rabbis who have a hard time swallowing the idea of a dark-skinned Messiah. In fact, they routinely refer to him as the black Nazarene, so in this version of the New Testament not only do the Jews crucify Christ, but they’re portrayed as racists to boot. The most intriguing aspect of this inflammatory flick is that it furnishes a worldly explanation for the Crucifixion.

LaMarre’s charismatic performance as Jesus grounds the low budget production, and he receives considerable help from a capable supporting cast which includes Debbi Morgan as the Virgin Mary and Ananda Lewis as Leah.

Is the film blasphemous? Blasphemy is in the eye of the beholder. But it’s certainly a lot closer in tone to The Ten Commandments (1956) and The Greatest Story Ever Told (1965) than to The Last Temptation of Christ (1988) or Andy Warhol’s Imitation of Christ (1967).

I suppose if Kanye West can appear on the cover of Rolling Stone sporting a crown of thorns, then we’re probably already primed for a religious epic featuring an ebony Prince of Peace.