A slick combo romantic comedy/espionage noir in which the audience may – or may not – be as duped as the characters, Duplicity takes distrust as a vocation to a high art. There’s also lots of surveillance on hand, as to how literally undercover spy sex possibly plays out problematically behind closed bedroom doors.

Written and directed by Tony Gilroy (The Bourne Trilogy, Michael Clayton), Duplicity stars Julia Roberts as CIA operative Claire Stenwick and Clive Owen as MI6 agent Ray Koval. After the two globe trotting masters of mutual deceit have a sexual encounter in Dubai, during which Claire drugs Ray into submission because she really needs to swipe those Egyptian military codes from him, they meet again a few years later somewhere else on the planet. And on far from friendly terms, when they find themselves working for the same company. 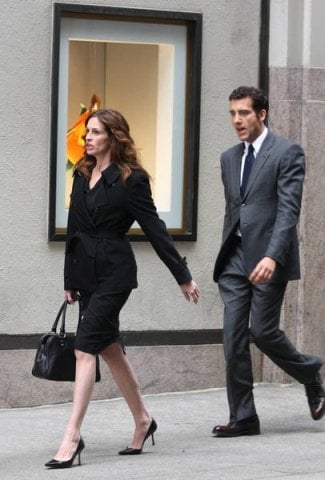 It seems that both have coincidentally quit government positions, for more lucrative gigs in private sector industrial espionage. And in a rare high point of this low intensity intimate relationship in progress, Roberts does a fruitless damage control vampy seductress showstopper, as she attempts to squirms her way through one night stand pretend amnesia. But too late, her male prey never forgot her toe rings.

Subsequently dividing their time between hot dates and ruthless yet strangely comical confrontations between two multinationals run by scary CEO rivals Howard Tully (Tom Wilkinson) and Richard Garsik (Paul Giamatti), Claire and Ray come up with a scheme for a different kind of screwing. That is, screwing the competing cutthroat companies and dividing the profits.

The problem here is not with the many hidden agendas but with the movie, in that there’s a whole lot more sizzling negative chemistry between Giamatti and Wilkinson, than any of the positive kind between those two designated libidinous lovebirds. Even when engaged in espionage style makeup sex or repetitive, smartly stylized premeditated dumping scenarios between lovers. It’s as if Clive has emotionally crumbled in the face of Julia’s star power, and she’s just decided to play her celeb self for the duration.

In effect, both are virtually upstaged by the nonstop, dizzying mix ‘n match time travel entertaining intrigue, of which there’s plenty, and the corporate thuggery that plays out like mercantile armies deployed and on the offensive to protect their respective fiefdoms, as flabby assassins in suits go at it like the Keystone Cops. Though the clownish antics may seem too benign for some, when assessing the current suspect real life rap sheets of multinationals on display.