The reigning movie villains of choice can be switched up with the changing times, and horror films seem to be no exception these days, what with the foreclosure crisis in full swing. And since we’re talking dubious machinations on the part of bankers, the increasing audience appetite to cheer for their demise in multiple gruesome ways, has not escaped the somewhat delightfully macabre thought processes of horror guru, Sam Raimi, with Drag Me To Hell.

And though the current housing nightmare hardly requires any significant flights of imagination to send it into scary movie territory, Raimi’s beyond the call of duty extreme terror tactics are pretty much without precedent here. Alison Lohman is Christine Brown, a highly uncooperative occult victim, in a role which might have been better served up by the somewhat weirdly fascinating Ellen Page, the original choice for the part. Christine is an ambitious farm girl turned nervous wreck alpha female big city bank loan officer.

When Mrs. Ganush (Lorna Raver), an eccentric elderly gypsy woman with bad hygiene shows up to plead for a new loan to avert foreclosure on her home, Christine basically tells her to get lost in order to make impressive points with bank management and cop a possible promotion. Too bad for Christine, the crafty elder puts a curse on her in revenge, which a local fortune teller deciphers as an imminent call from the devil’s pet goat, who will soon escort her to the underworld whether she’s in the mood or not. 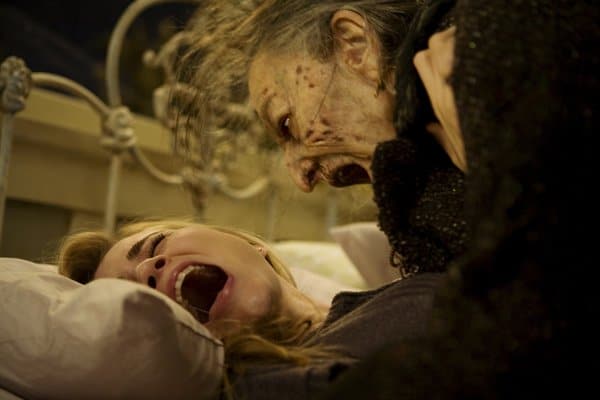 As Christine embarks on a desperate one woman crusade to ward off assorted demonic forces while her puzzled boyfriend (Justin Long) mostly sulks and wrings his hands, the audience gets a few eyefuls of what might be characterized as cross-generational, geriatric home invasion female mud wrestling. And sucking lots of involuntary face with the fearsome Ganush from beyond the grave.

There’s also a kitten sacrifice via vegetarian perp, occult party animals, a slice of cake that comes alive, and a homicidal button, don’t ask. This, while closet fatty, formerly chubby Christine, by now at wit’s end, takes to ordering endless rounds of hot fudge sundaes at the neighborhood luncheonette.

Possessed property in foreclosure meets possessive demons in Drag Me To Hell, an alternately tongue in cheek, claws in the neck horror movie that is as masterfully terrifying as it is effectively hilarious. And there might even be a political message somewhere, in between all the bouts of lunatic gore, that we are responsible for each other’s lives even though we might not care to think so, and that Satan may reside in some new and different places today. But if the movie makes any impression on banks to stop foreclosing or else, that’s good enough.