In US courts, defendants aren’t exactly declared innocent, they’re rather found to be not guilty for lack of sufficient evidence, a state of affairs that can in reality haunt a blameless individual for the rest of his life. That is, in terms of that gnawing concept of lingering doubt that may persist against him in the eyes of society.

Such a troubling notion, touching on the impossibility of closure that defines multiple symbolic aspects of the mysteries of human existence, is the weighty subject matter of John Patrick Shanley’s Doubt. Adapted from his award winning stage play, the movie unfolds within the hermetic, austere walls of St. Nicholas Catholic School in the Bronx in the mid-1960s, an institution where guilt is nearly a fetishistic way of life.

Punitive dreaded principal and supremely sarcastic head nun, Sister Aloysius (Meryl Streep) presides over the eerie gothic school more like a prison warden. She’s the sort of severe religious headmistress who believes that bad boys would set their foot on fire to get the day off from school, is suspicious of that newfangled writing implement called the ballpoint pen, smacks students in the head for not paying sufficient attention, and bans Frosty The Snowman from holiday events as a shameful vestige of paganism.

So it’s no surprise when Sister Aloysius comes into conflict with jolly, kindhearted Father Flynn, a parish priest at the school who preaches – gasp – compassion and tolerance from the pulpit, succumbs to the apparent sin of temptation by taking three sugars with his tea, and likes Frosty The Snowman. And above all, arouses her suspicions when he demonstrates a special interest in helping Donald (Joseph Foster II), the first and only black student at the school, adjust to his socially problematic situation there in what was the heat of the turbulent Civil Rights Movement era back then. 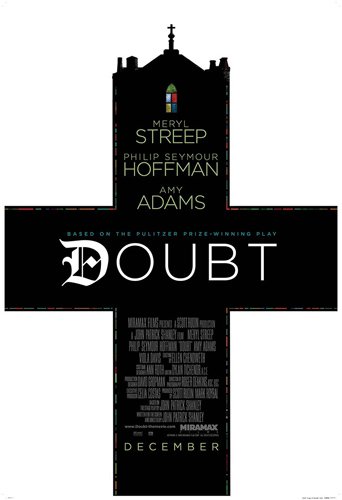 And though Sister Aloysius has only minimal circumstantial evidence of any improper relationship with Donald on the part of Father Flynn – when he’s caught covering up an incident where the boy guzzles altar wine on the sly – the nun embarks on a rabid mission to hound the priest until he’s driven out of the school. And Sister Aloysius is aided in her obsessive cause by a gullible young nun (Amy Adams), whom she pressures into spying on Father Flynn.

Doubt is visually stunning and drenched in moody, chilling atmosphere, and Meryl Streep is nothing less than terrifying as the self-righteous dragon lady. But why are our most esteemed older actresses always relegated to all those ghastly shrew roles. And there’s something awfully hypocritical and, yes, sexist about these entire proceedings. And it’s not just those shamelessly manipulative scenes of the priests making merry over wine and sumptuous dinners in their separate quarters, while the nuns pick over their unappetizing looking meals like fussy crones with chronic indigestion.

If Shanley is in fact condemning any rush to judgment and professing doubt as a humanistic principle, why is the deck so solidly stacked here, not just against Streep’s malevolent character, but all the women in the film? There’s even a mother who confesses that she doesn’t mind if her son is being molested by a pedophile priest, as long as he gets to graduate. Will all the mothers in the audience who have ever heard such an idea even hinted at from the lips of a fellow female parent, please raise your hands.

There’s also a certain level of irresponsibility in concocting such a theme dismissing priest pedophilia as a trumped up conspiracy theory on the part of mean nuns, considering the alarming public record. Not to mention the historical record of priest, not nun, conduct, from aiding and abetting the indigenous genocide around the world during the age of colonialism, to lighting up those fires under presumed heretics during the Spanish Inquisition. The film, while allowing its imagination to run wild with unfounded insinuations of its own, has unfortunately confused the camera with the pulpit.