Streep and Hoffman Square-Off in Screen Adaptation of Modern Parable

There has been an explosion of lawsuits filed against the Catholic Church in recent years by parishioners claiming to have been molested and left traumatized by pedophile priests during childhood. Tragically, the Church apparently served as a safe haven for these sickos who had preyed upon the innocent kids entrusted in their care.

Virtually all the cases were settled, with the victims walking with for millions of dollars, even though they might remain emotionally-scarred for the rest of their lives. If you’re wondering how a supposedly holy man might fool his congregations while secretly using a boy as his personal sex toy, check out Doubt, directed by John Patrick Shanley, who has also adapted his Tony-winning play to the screen. 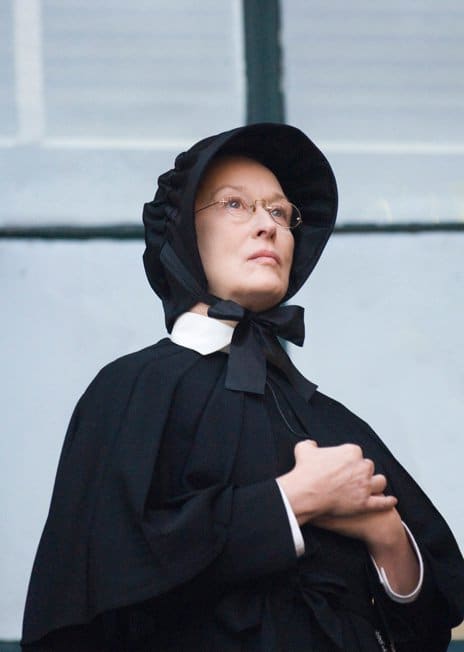 The film stars a couple of consummate actors in Oscar-winners Merry Streep and Philip Seymour Hoffman, who square-off as suspicious Sister Aloysius and the guilty-of-something Father Flynn, respectively. The story is set at a parish in the Bronx in 1964, where Aloysius is the steely principal of a school which has just admitted its first black student, an 8th grader named Donald (Joseph Foster).

Her alarm bells go off when his teacher, Sister James (Amy Adams), hints that Flynn has taken a special interest in the lonely lad and even went so far as to summon the kid from class for a private meeting in the rectory. The two nuns confront the priest who, in turn, takes offense at the suggestion that his intentions toward the needy newcomer could possibly be anything other than honorable.

But the unconvinced Aloysius remains ever-vigilant, and the rest of the picture is devoted to her repeated frustrations at being unable to catch the pair in flagrante delicto. Worse, she gets no help from Donald’s mother (Viola Davis), who’s just happy as a clam to have a father figure come into her son’s life.

As unseemly as such a development sounds, it rings true given the way the Church was conveniently cloaked in secrecy back in those days when words like gay or sexual abuse still had to be whispered in polite company. Thus, it would have been easy for Flynn to hide his kinky transgressions, if any.

As the title implies, Doubt isn’t particularly concerned about clearing up the mystery. Rather, it would prefer to have you scratching your head as you walk up the aisle. Without ever seeing the priest actually crossing a line, we’re left to draw our own conclusions as to whether he belongs behind bars or if Sister Aloysius is simply being overzealous.

Call me crazy for expecting a more tidy resolution of this ultimately unsatisfying parable, in spite of a taut plotline and several inspired performances. Is that it?