In a raw and rude makeover courtesy of who else, Judd Apatow, Adam Sandler reinvents himself as whining geek turned super-silly action hero Israeli assassin in Don’t Mess With The Zohan. A newly hairy and heavily buffed along with heavily accented Sandler sexes up his screen image in a crude Middle Eastern culture wars political comedy that is ultimately no laughing matter.

Sandler is the reluctant Israeli counter-terrorist operative who’d rather be doing dainty stuff like cooking dinner and hair styling. Which doesn’t cramp his macho style at all, at least when it comes to impressing the bathing beauties at the local beach, by dropping his swimming trunks or flipping a fish off the grill and directly into his butt, while tending the barbecue.

When he’s had his fill of beating up Palestinians, catching their bullets in his nose – I kid you not – and stealing their goats, the jaded closet peacenik fakes his own death at the hands of formidable Arab foe Phantom (John Turturro) while playing ping pong together with a grenade. Then he heads for New York City stowed away in a dog kennel in the cargo compartment. And assuming the name of one of his fellow passenger pooches, Zohan aka Scrappy heads for the nearest hair salon.

After being tossed out of assorted beauty parlors for a litany of indecent behaviors, the swaggering aspiring stylist with a too-much-information bulging prosthetic crotch settles on a salon run by Dalia (Emmanuelle Chriqui), a fetching Palestinian-American. And while doing mandatory apprentice duty sweeping the floors there, Scrappy educates himself in the trade, which in his mind includes seducing all the senior citizen female customers comfortably over the age of consent. Eventually a confrontation ensues uniting neighborhood Israeli and Palestinian immigrants against an urban removal mean corporate suit, who wants to clear out the area to build a mall. 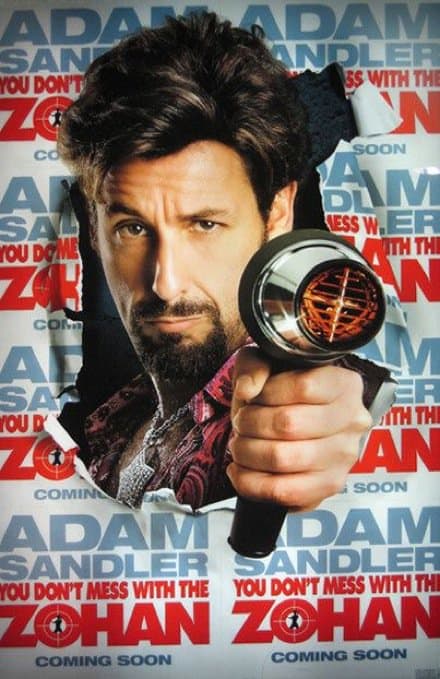 Don’t Mess With The Zohan as a counter-terrorism satire, is its own worst enemy. The story is filled with all sorts of bright ideas, like peace in the Middle East as a promising possibility based on the New York City model, where everybody tends to get along and live in harmony no matter what their historical differences. There are also delightful surprise cameos popping up everywhere. But Apatow’s compulsion to talk dirty nonstop and Sandler’s eagerness to act out each and every one of those vulgar and raucous fantasies, add up to a marriage of minds far from being made in heaven. Rarely has sex been such a turnoff on screen.