Judging by recent romantic comedies however light or dark, such as Serious Moonlight and Did You Hear About The Morgans?, the most effective ultimate aphrodisiac lately when it comes to rekindling doomed conjugal bliss, seems to be criminal activity. So what may be emerging, is the exceedingly odd hybrid genre, the romantic comedy crime caper. Move over, Viagra and sex toys.

Written and directed by Marc Lawrence (Miss Congeniality) and alternately sweet and spicy, though somewhat mischievous too, Did You Hear About The Morgans? spotlights designated battling ex-lovebirds Hugh Grant and Sarah Jessica Parker as Paul and Meryl Morgan. While enjoying high end successful Manhattan careers as a lawyer and luxury digs real estate agent respectively, the same cannot be said for their marriage, which unravels after Paul confesses to an extra-marital one night fling with a colleague. 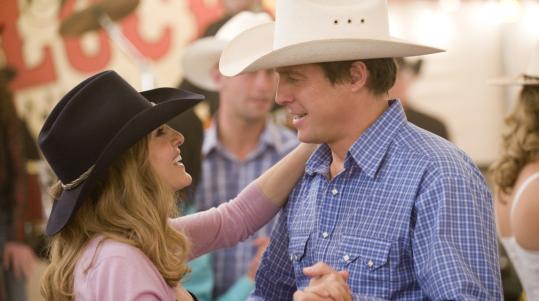 And when Paul is sent away to live in a hotel but constantly begs forgiveness, an emotionally bruised Meryl won’t hear of it. Though she does agree to dinner, an ill-fated decision which finds the couple in a luckless situation, as reluctant eyewitnesses to a drug lord execution in progress. A predicament which lands them, to their dismay, in a federal witness protection program for their own good.

Bidding tearful farewell to her cherished cell phone and closet overflowing with designer duds, Meryl is packed off to rural Wyoming with the least likely guy she’s in favor of ever being stuck with, and 24/7 no less. Worse still, is the blue state couple’s red state encounter with gun toting locals. Not to mention their rancher hosts, or rather stern wardens, the Wheelers (Mary Steenburgen and Sam Elliott), along with a strictly enforced regimen of communications device deprivation. As in no phones, computers or Palm Pilots, period.

Did You Hear About The Morgans? charms and delights, not for its fairly standard storytelling, but rather the ongoing kooky chemistry between that comedically symbiotic screen team, Grant and Parker. Though hopefully this unorthodox sort of kiss and make up outing won’t have spouses pursuing witness protection as a couples therapy retreat anytime soon.