I recently attended the International Independent Film Festival in NYC and I had the opportunity to meet Emad Beshay who was one of the many filmmakers’ there.

Hello Emad, nice to talk with you again, could you tell me about yourself?

I’m an Egyptian born American. I have played piano since I was a child and I moved to the United States in my teen years to pursue Music Studies after living in Europe for a while. I attended the Institute of Audio Research in New York City and earned a Diploma in Music Engineering, and then I attended the School of Visual Arts in New York City and earned a Bachelor degree in Film Directing.

When did you realize that your passion was directing?

I realized my passion for film in the Institute of Audio Research when I attended “Music for Film” classes. I then attended the School of Visual Arts to pursue film studies.

Tell me a little about the film “The Lost Face” that you recently directed?

The plot of the film is: Haunted by images, “deja vu,” Karen Gold (Lisa Regina) wanders through her life, finally guided by her broker Mark Blackhawk, (Carson Grant) as he places her into destiny’s hands.

When I wrote the script, I wanted to highlight the mystery of the human mind and it’s relation with time and space, our past and present.

Regarding the house, why did you happen to choose this one you chose?

I chose that particular house because it was isolated in the woods and it fit the spirit of my script perfectly.

What are some of the other projects that you’ve worked on?

I have written and directed a few short films. Also, I worked on the award winning “Neo Noir” by director Chase Palmer and on “American Cyborg” by director Christian Varley.

Do you have any plans for a new project along with your future goals?

I’m currently finalizing the writing of a new project which will be scheduled for production soon.

The vision I have for my future films is to expose more and more of our human nature and it’s enigma. 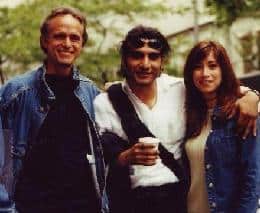 “Emad, thanks for the tickets, enjoyed the screening and all the activity of the film festival” And what a versatile actor Carson Grant is, wow, frightened me!!”

Keep up the great work.

You can read more about Emad at: