History according to Hollywood, is a little like the claims made on food items in the supermarket. In other words, while the hype on the packaging brags that no matter what you eat is good for you, the ingredient labels may indicate otherwise. In the same way, especially since nobody ever seems to be a villain in their own life story, personal accounts of historical events, as in the WW II drama Defiance, may often be suspect, and laden with problematic content like biases, grudges, and extreme characters one way or the other.

Directed and co-written by Edward Zwick (Blood Diamond, The Last Samurai) and based on the book, Defiance: The Bielski Partisans, by historian Nechama Tec, the film relates the actual and little known heroic account of the three Polish Bielski brothers, who fled their Belarus town into the forest during the Nazi invasion and massacre of Jews there. Determined and resourceful, though often at odds with one another, the three Jewish siblings – Tuvia (Daniel Craig), Zus (Liev Schreiber) and kid brother Asael (Jamie Bell) figure out how to survive in the rugged wilderness for the duration.

Eventually the trio are joined by other Jewish civilians fleeing the Nazis. And though they’re at first reluctant to share and expand their secret encampment and the little food they’re able to round up, while making themselves more vulnerable to discovery by the Germans and their many local collaborators alike as their population grows, these accidental partisans eventually turn the ragtag tribe into a highly functioning settlement. Including the establishment of a hospital and militia, and skilled production and repair centers. 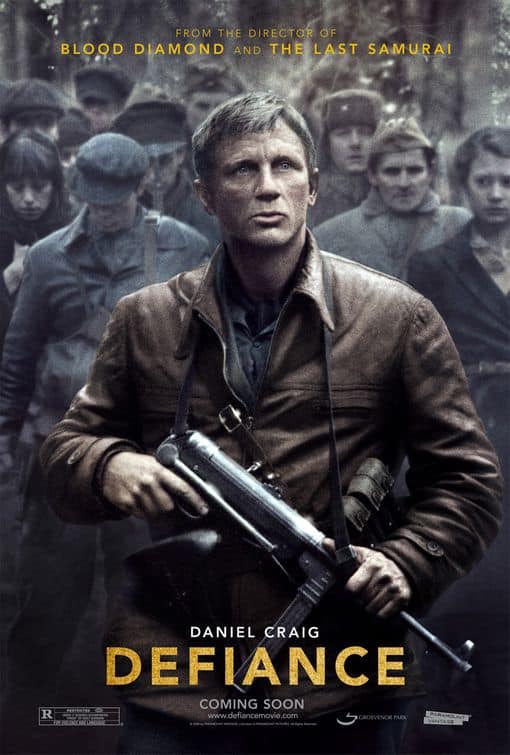 There’s a little romance on the sly too occasionally, and some comic relief provided by intellectuals who’ve got lots to say but little to contribute in the way of survival skills. And a few fascinating detours into class conflict on a microcosmic scale, as a social elite that once snubbed the brothers in town, are now forced to be dependent on them for their continued existence. The creation of this survivalist collective as a symbol of the future establishment of Israel, is an evident allegory intimated by Zwick.

These many enormously powerful details of Defiance combine to create a fascinating historical epic. What the production didn’t need, was an excess of either saintly or wicked warrior melodrama, grating simulated Eastern European accents, and a far too repetitive conflict between the more laid back political animal Tuvia and ready to rumble ruthless fighter Zus, perhaps internalizing the Nazi methods he himself endured, until we more than get the point. And a few contradictory sidebars tossed in, including the portrayal of the caricatured Red Army as a bunch of drunken, immoral louts, when in fact the Soviets lost 20 million of their own population in WW II, while resisting and defeating the Nazis. Something the West was not too keen on acknowledging, until the end of the Soviet Union and the Red Scare. And if the Red Army was so dismissive and contemptuous towards Zus, why did he in real life leave the camp to join up with them until his death in battle against the Germans.

Defiance is actually quite commendable a production and the first glimpse in movies, beyond Warsaw Ghetto films from Hollywood, of Jewish resistance to the Nazis. If only Zwick didn’t try so hard, and had just let the inspirational event speak for itself.