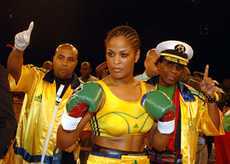 Don’t think that just because she was born the daughter of a revered icon, that life has been a bed of roses for Laila Ali. While the 5’10,” 175 lb. beauty has followed her father’s footsteps into the ring, she had to overcome his absence, juvenile delinquency, jail and other assorted hardships on her way to being crowned the undefeated women’s boxing champ.

Right off the bat, this revealing documentary informs the audience that while Muhammad Ali might have been the greatest fighter who ever lived, he was definitely not the greatest father. After all, he’s been married four times and had nine children, some from extramarital relationships. And he was only married to Laila’s mother, Veronica, for less than ten years.

But that didn’t prevent Laila from emulating him, especially in terms of demonstrating a determination that proves she inherited the heart of a champion. Besides chronicling her rise to the top of her profession, which included 21 knockouts in 24 bouts, this fascinating bio-pic shows her to have a social consciousness. Perhaps because of her own brushes with the law as a troubled teen, she now devotes much of her free time to giving inspirational speeches to at-risk kids.

Given that Laila found widespread fame earlier this year when she finished in third place on Dancing with the Stars, followed by her more recently being named one to People Magazine’s 100 Most Beautiful List for 2007, she appears perfectly poised to leave pugilism behind and to parlay her success into a line of work that won’t involve punching and getting punched.

Can anyone one say “Hooray for Hollywood!”

Daddy’s Girl is set to air on TV One on Father’s Day, June 17th at 8 PM. (Check local listings)