Whether you’re thrilled or turned off by the Manhattan monster freakout fare that is Cloverfield, will depend on how up close and personal your taste is in disaster movies, and your queasy threshold for a hand-held camera jogging along on a bumpy ride after the mayhem and taking it all in. In any case, the gruesome gore and nonstop hysterical mass panic are exceedingly in-your-face, no matter what row you’re sitting in. So if that’s your cup of virtual Koolaid, dig in for the intense eighty minutes duration with sweaty palms and clenched teeth. 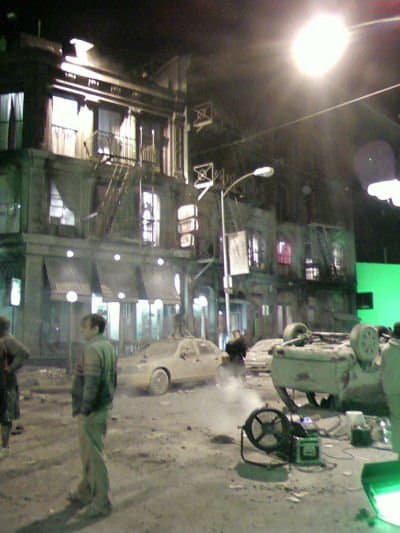 The gritty, determined low-tech camerawork of Cloverfield more than effectively enhances the documentary effect, and will likely make collective audience skins crawl. The stage is set for the creepy beast feast to come, as the audience is invited to eavesdrop, at a decisive emotional distance, on trendy young Soho Manhattanites sharing an evening get-together full of meaningless small talk, unraveling romances, a bruised ego here and there, and heavy drinking, all captured as a badly filmed amateur home video. Suddenly the apartment is jolted, explosions shake the night urban skyline, and the party’s pretty much over.

The rest of Cloverfield is filmed stressfully by director Matt Reeves, as public panic and anarchy in the streets, down in the subway, and from the top floors of dangerously leaning hi-rises uprooted from their foundations. Meanwhile, the partygoers wander around in a shock state, with the camera still in tow. as the tops of buildings are exploding everwhere, and Lady Liberty’s torn head lands in the middle of a street. But the culprit is far less realistic than the massive destruction he (she?) inflicts across the concrete island, a generic mutant mix of a multitude of movie monsters we’ve seen many times before. While the cringe factor is decidedly enhanced by the similarity of the relentlessly grueling footage, to the events of 9/11.

But ecological rather than political, this mysterious creature getting off on wreaking mass havoc is no Al Qaeda. First reported on television breaking news as an earthquake or an oil rig explosion, it turns out to be neither. Seemingly rising from the putrid rivers surrounding Manhattan, it could be a deadly mutation marinated and spawned out of those environmentally compromised polluted waters, who knows. But the really strange question that persists in this meticulously simulated screen reality show, however irrelevant, is the unbelievability of who would keep on filming constantly threatened death and near-death experiences, unless the seemingly destruction-proof camera has been stuck to that person with gobs of crazy glue. Not to mention, why is this monster so mad at Manhattan. We may have to wait on that one, for the likely sequels.