67 year-old Inge (Ursula Werner) has been married for several decades to Werner (Horst Rehberg), a man who has proven to be a loyal and dependable provider as the family patriarch over that time span. However, now that he’s retired, he gets most of his kicks riding passenger trains around Germany, while his wife operates a small sewing business part-time out of their Berlin flat mending clothes as a seamstress.

Although Inge is a God-fearing woman who sings in the town choir, the devil gets the better of her one day when she makes a house call to a client to drop off a pair of trousers. She impulsively makes a pass at elderly Karl (Karl Westphal) and the two fall immediately in lust, and they proceed to embark on a torrid, secret love affair during secret daytime liaisons.

Thoroughly-enjoying the unanticipated opportunity for intense passion at this advanced stage of life, Inge goes after pleasure with all the gusto her body can still muster. And when guilt about cheating on Werner starts to set in only as a belated afterthought, instead of fessin’ up she confides in her grown daughter, Petra (Steffi Kuhnert) whose worthless advice amounts to little more than the English equivalent of “You go girl!” 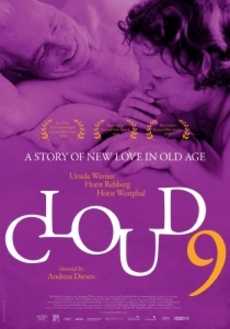 So unfolds Cloud 9, a riveting drama directed by Andreas Dresen which explores infidelity among senior citizens with a profusion of nudity which leaves little to the imagination, like an explicit TV commercial for Cialis or Viagra. For there’s no denying what Inge’s after here, given that she already has a devoted, but boring spouse patiently waiting for her at home.

Nonetheless, the plot thickens when the cat finally comes out of the bag, and the question soon becomes whether she’ll wreck the relationship with the man she built her life around for the sake of a miraculous-virile, 76 year-old stud who knows how to satisfy her in bed. Which guy wins? Far be it from me to spill the beans, except to say that doctors ought to expect an upsurge in office visits by AARP patients demanding prescriptions for performance enhancers.

Literally and figuratively blows the sheets off the taboo subject of geriatric sexuality.

In German with subtitles.

(Warning: It is sexually-explicit)