As the media has merged increasingly with movie drama to produce that questionable hybrid of infotainmant, so have movies taken a similar cue the other way around, with more often than not unfortunate results. Mounting well worn news stories on the big screen is a tricky feat, necessitating not only something surprising and different into the mix, but also an energy that lifts it above journalistic rehashing. Novice director Jarrett Schaefer’s Chapter 27, a fictionalized revisiting of Mark David Chapman’s 1980 NYC gunning down of famed Beatle John Lennon, like Chapman himself, stays stuck in outsider perspective even when drowning in interior monologue, as the story plods along primarily in tourist spectator mode. 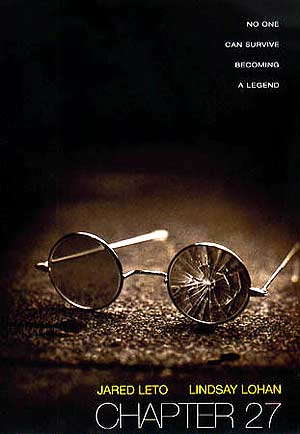 The lion’s share of Chapter 21’s narrative takes place inside the head of Chapman, played with impressively dedicated creepiness by pretty boy Jared Leto, into flabby negative makeover here and reportedly fleshed out by seventy-five excess pounds, move over Super Size Me. Which means essentially, that aside from the far too familiar replay of the assassination scene and Chapman’s ordering up of a hooker to his hotel room like a death row con’s contemplated last meal, the audience is held captive inside the perp’s depraved and rambling thought processes for the duration.

Not at all helpful to the stagnant proceedings and skimmed surfaces, is Lindsay Lohan, who pops up as hey, Jude, wouldn’t you know it, a fellow fan staked out in front of Lennon’s apartment building along with Chapman, seemingly living for a glimpse of the music icon passing by. The tidbit of fascination here, is that Lohan seems to be trying on for size for a hoot, playing what she likely loathes most on this earth in her own life, the rabid fan. But her relationship with Chapman in the film, which includes standing him up for a sushi date but hanging on to his every weird and pathetic word over a cup of coffee in a diner, is just too clueless in the extreme.

With little in the way of probing investigative inquiry or new revelations, Chapter 27 like the interior of the book to which it refers – Catcher In The Rye and Chapman’s exceedingly unhealthy fixation on its main character, Holden Caulfield – feels unfinished, incomplete and unresolved. There’s also the sense of an eerie parallel at work here, between Chapman’s pathological identification with the ill-fated Beatle, and the director’s morbid, clinging obsession with his deranged protagonist. Which leaves a mysteriously lingering if not strangely distracting aftertaste, as to what exactly is stirring about in the mind of Schaeffer.