A spy comedy that may or may not be about the irrelevance or absurdity of the CIA in contemporary times, Joel and Ethan Coen’s Burn After Reading might ironically be accused of determined subterfuge and evasion on the part of the sibling directors with prankish tendencies themselves. It’s as if they mischievously set out to conspire crafting a critic-proof production through sleuth-style sheer elusive plot designs of their own, while bent on showing audiences a good time for whatever inconclusive reasons known perhaps only to those bad boy brothers.

Burn After Reading plays out in a Washington DC conceived in general as an outdoor lunatic asylum, with an array of associated behind closed doors dimwitted machinations, very few or none of them having to do with politics. If you’re keen to accept this bizarre premise about the Capitol from the start, then you’re pretty much ready for the zany if peculiar ride to come.

At the onset of a chain reaction of multiple local conspiracies that proceed in no particular order, while contributing to the heightening of comical effect overall, smirking old school CIA snob Osborne Cox (John Malkovich) is summoned to a meeting where he’s unceremoniously dumped and demoted to a bottom feeder position at the State Department. Brutally cursing out the Company for being a pathetic shadow of its former self in the presumably good old days of the hyperactive Red Scare, Cox resigns, taking along some classified material to begin writing his tell-all memoirs. 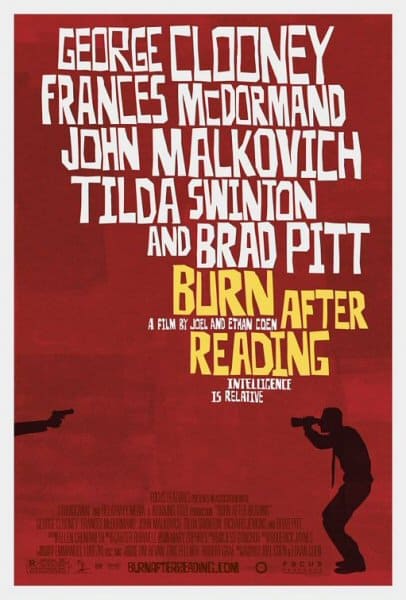 Unfortunately, the CD in question harboring secret documents, is left behind at the Hard Bodies Gym, where it falls into the hands of conniving trainer Linda Litzke (Frances McDormand) and her jolly jock fellow employee sidekick, Chad Feldheimer (Brad Pitt). Since it just so happens that Linda hates her body and has signed up for four plastic surgeries to ‘reinvent’ herself, which her health insurance provider won’t approve, she’s bent on extorting hefty reward money from Cox for returning the CD.

At the same time, turning up to complicate matters even further, is George Clooney as Harry Pfarrer. He’s a very married serial seducer who’s doing Cox’s snooty wife Katie (Tilda Swinton) among others, and eventually Linda too, when they hook up after placing simultaneous ads on an Internet dating site while Pfarrer’s spouse is out of town.

Between randomly colliding plot lines and Linda’s own precarious balancing act juggling downtime stranger sex and an uncooperative ex-CIA extortion victim with violent tendencies, she gives up on Cox and proceeds to Plan B, a visit to the Russian embassy with tag-along Chad, to possibly ply her devious wares there. But the CIA, suspecting something’s up in the neighborhood, has nearly everybody under surveillance while doing their own dodging act from the DC police, and without a rational conclusion in sight ever materializing about anything.

An investigative comedy about an essentially benign CIA that has become too bungling lately for its own good, and in a seat of government city where the only espionage schemes and dastardly covert deeds in existence are purely personal, revolving around sex, greed and ambition, is pretty risky business to begin with. There’s also the matter of perpetual, unresolved cluelessness as the prevailing narrative device. But this enormously talented ensemble cast toughs out all the many meandering rough patches admirably, in a movie stringing along narrative threads, the actors and the audience, all in equal measure.