Borat Sagdiyev (Sacha Baron Cohen), a terminally-gullible TV reporter hailing from a primitive little village in Kazakhstan, harbors some rather naive notions about the West, because he learned most of what he knows about American culture from television. Though he’s a sexist, incestuous, homophobic, anti-Semite, none of that narrow-mindedness has prevented the clueless journalist from landing an assignment to shoot a documentary about the relatively polite and politically-correct United States. 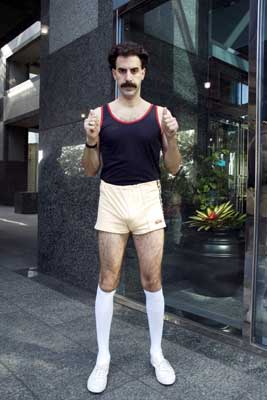 This fish-out-of-water premise is the fulcrum for the non-stop nuttiness generated by Borat, a zany docu-comedy based on the kooky character from HBO’s Da Ali G Show. Accompanied by his morbidly-obese producer, Azamat Bagatov (Ken Davitian), the annoying Kazakh careens across America in a rundown ice cream truck.

Sporting a thick, Eastern bloc accent and clumsier than the proverbial bull in a china closet, Borat conducts a disconnected series of unscripted interviews at each port-of-call. Invariably, he leaves behind a trail of dumbfounded subjects who appear to be as baffled by the affable foreigner’s bizarre behavior as by the idea that they’ve might have just been had.

Whether he’s attending an etiquette class, buying a used-car, getting his first driving lesson, singing the Star Spangled Banner at the rodeo, shopping for antiques, or crashing a Gay Pride parade, our provocative protagonist manages to get a rise out of everyone he encounters. While there are side-splitting sequences galore in this cleverly-executed farce, expect to be disturbed by the underhanded fashion in which some of his subjects appear to have been tricked into participating in the project.

Vulgar and exploitative, yet somehow simultaneously inspired and hilarious, this crass cross of Jackass and Candid Camera is a convulsively funny sample of guerilla cinema you’ll be ashamed to admit you loved every second of. Easily, the funniest film of 2006.