Becoming a parent can certainly take the edge off your darker or wilder side, out of sheer embarrassment lest your kids get a clue, and recent dad Adam Sandler is no exception. The problem is that Sandler seems to be parting ways with his goofy and eccentric persona, along with those gross-out tendencies, that defined him individuality as a comic, however crude or lewd those impulses might be.

So what we’re left with is, well, Bedtime Stories, an undercooked, formulaic kid’s tale that seems to have been put together on the fly, and with no-frills production values. In this basically Cinderfella type of yarn directed by Adam Shankman (Hairspray), Sandler is Skeeter, son of a late motel owner (Jonathan Pryce) bought out by a greedy developer (Richard Griffiths) who promised to make the kid a manager when he grows up. But he instead assigns Skeeter janitorial duties in what has now been transformed into a lavish luxury hotel. 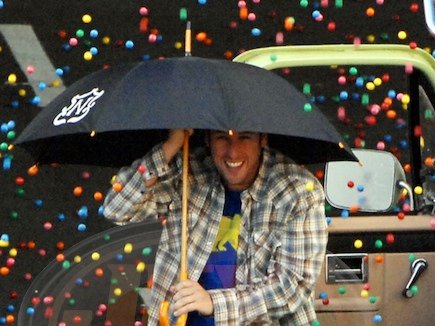 When Skeeter’s sister, single mom Wendy (Courtney Cox), leaves town to look for work, he’s stuck with babysitting her two far from easy to please preteen kids, Patrick (Jonathan Morgan Heit) and Bobbi (Laura Ann Kesling). Since they’ve been raised in a strictly organic living environment, on wheat germ, rice cakes, and no television or popular culture references to speak of, Skeeter must invent his own bedtime stories to amuse them, which is no easy task. Wendy’s friend Jill (Keri Russell) stops by occasionally to look in on the situation, but her equally glum attitude is no help in conjuring up some chuckles for the small fry.

At some point, the endings provided by the kids to an assortment of wacky stories Skeeter contrives, including jaunts to the old Wild West, outer space and Ancient Rome, start coming true for the baffled handyman in real life. But these bargain basement, on the cheap fantasy interludes are even less funny for the audience than for these underwhelmed kids. And some frantic to please business about Skeeter’s rival at the hotel, played by Guy Pearce, along with his best buddy Mickey (Russell Brand), feels simply embarrassing for all concerned.

You just know a movie is in really serious trouble when the characters you can relate to most, are the ones scratching their heads in hopeless confusion at the on-screen jokes. In addition to a saucer-eyed anatromic pet guinea pig upstaging Sandler, and coming off as the main attraction in the movie.

There is one great Sandler moment, when he makes a desperate bid to evoke laughs from the unamused kids (and audience), by eating a toothpaste sandwich that comes with the automatic added bonus of not having to brush your teeth afterward. But I’ll pass on the Cinderfella part, where in place of those magical shoes, Skeeter seems to be promising to keep lovingly sticking around ‘like the stink on your feet.’ Nose clips, please.