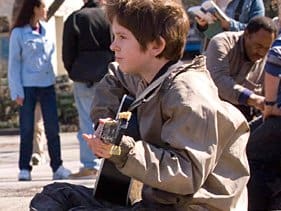 Yarns about the Big Apple are usually best told by those who can lay claim to being immersed in the life of the city and its surrounding burbs, and who are in tune with its colorful vibes, unique native nuances, and sheer craziness. So when you put together a movie like August Rush that’s spawned in Hollywood, lifts its tale straight out of the British children’s classic, Oliver Twist and is helmed by an Irish director (Kirsten Sheridan), the too many cooks, too little local flavor end result is awkwardly generic, to say the least.

August Rush (Freddie Highmore, initially named Evan by the social workers) is the orphaned waif in question , the offspring of a passionate one night stand who’s been dumped at an upstate home for unclaimed kids by his indignant upper crust patrician grandfather (William Sadler). The tragic unwed mom is debutante celebrity cellist Lyla (Keri Russell), who crosses paths by chance with up and coming Irish rock guitarist Louis (Jonathan Rhys Meyers) while she’s star gazing up on her penthouse rooftop.

Shortly after, an uncommonly naive Lyla finds herself with child. And within just a few movie minutes, she’s hit by a car, gives birth, is informed by dear old dad that the baby is dead, and is begrudgingly sent back to cello duty at the NY Philharmonic. In the meantime, Evan/August is terrorized by bullies daily, up at his home for boys, but nevertheless refuses to allow himself to be adopted. (We have to logically assume that this obstinate refusal stems from an exceedingly precocious infancy, the age when most healthy white children do get adopted). August is instead holding on to the dream of being united one day with his mystery parents, whom he’s certain are musical geniuses since he’s so deeply connected to the music in nature all around him. But August has no way of knowing about his own talent for sure, since there’s not a musical instrument in sight at this peculiar orphanage, not even a whistle, just brooms to keep things tidy.

When he gets wind that a well meaning social worker (Terrence Howard) is arranging his adoption, like it or not, August runs away to Manhattan to look for his parents. There, he’s taken under wing by crafty Fagin-esque entrepreneur bum Wizard (Robin Williams), who presides over an army of musically inclined urchins in an abandoned theater, that he sets up on the streets daily to perform for spare change. Wizard bestows upon the kid the stage name August Rush, and sends him out to sing for his supper in Washington Square. By chance and once again in fast forward succession, August is taken in by the kindly pastor of a black church, instantly matriculated into Julliard’s prodigy college program, and tapped to conduct the Philharmonic in a gala Central Park concert. Where you-know-who also just happens to be performing, and you-guessed-it by chance hears the music while driving by, and dashes on over.

While children may enjoy the extreme flights of fancy and kid fulfillment creative dreams of August Rush, the grownups may find the barrage of coincidences just a tad too sugary for their taste. In any case, telegraphing the message to impressionable young minds that all you need to succeed in life is about fifty easy-to-come-by strokes of good luck, might not be a such a great idea.