Buzz in advance about a movie may not be a good thing at all. While positive word of mouth can end by disappointing audience expectations, in contrast cinema bad boy Lars von Trier’s self-flagellating weepie Antichrist evokes quite a different expectation. Which essentially may be trying to dispel any preconceived notions while viewing the film, brought on by nearly universal critic scorn intimating that the filmmaker could himself be the antichrist.

Von Trier, the Danish advocate of the Dogma modern minimalist school of moviemaking, goes to nearly opposite extremes this time around with Antichrist, a flamboyant excursion through too much information graphic sexual sadism, mutilation, and explicit artsy horror. To put it mildly, hopefully no animals or human private parts were harmed in the making of this movie. 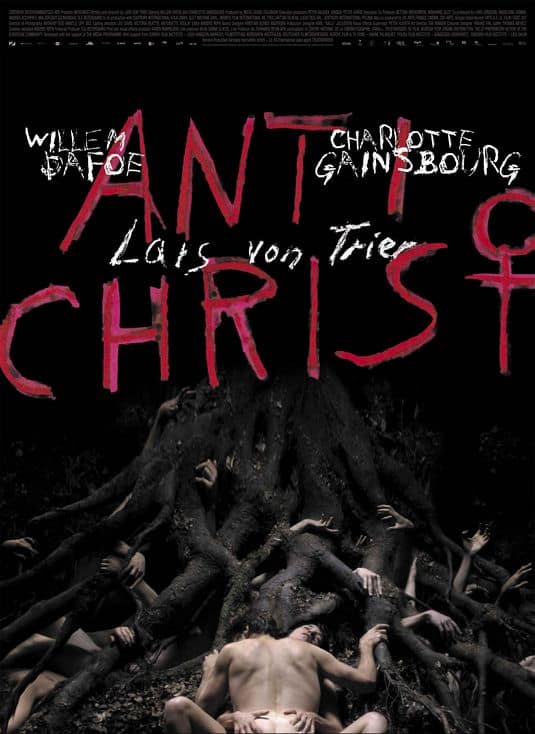 The director has offered a disclaimer of sorts regarding Antichrist, that he conceived of the film as a very personal form of therapy “without much enthusiasm” and comprised of “scenes added for no reason, and images composed free of logic or dramatic thinking.” Okay. This, while von Trier was in the throes of a deep depression. And though the Antichrist is no Jason, fasten your seatbelts.

The story unfolds in the Pacific Northwest, where matrimonial sex junkies designated as He (Willem Dafoe) and She (Charlotte Gainsbourg) make mad love all around the house and up against various appliances. Meanwhile, their unattended toddler somehow escapes from his crib by opening a latch, and after a brief glimpse of parent sex through an open bedroom door, jumps to his death from a window.

The action, mostly of the pretentious pornographic variety, then moves to a more primitive setting, where the grieving couple retreats to their vacation cabin in the woods that they term Eden, to confront their broken lives. Now, He just happens to be a psychotherapist, and various kinky when not satanic sex remedies are prescribed for his inconsolable wife, who complains that He never paid much attention to her previously.

In the course of this back to nature perverse psychodrama, genitalia are trimmed off with large scissors, a sex organ ejaculates blood, She expresses her demonic separation anxiety issues by driving an iron rod through her spouse’s leg and then attempts to bury him in a tree trunk, and von Trier seems to be amusing himself on the sidelines by torturing wildlife creatures, when not the actors and audience, including feeding a bug infested baby bird to a vulture.

Dafoe in the course of the narrative, transforms from New Age sexorcist into a deranged spouse with homicidal tendencies, as rambling, pointless small talk aims for mystically trendy. Hopefully Antichrist was at least just the cure for whatever ailed the filmmaker.