A Hollywood rule of thumb always seems to be that tossing everything but the kitchen sink into the mix, will be guaranteed to please everyone. But which often pleases nobody, in effect defying that whole is equal to the sum of its parts theory, as the movie proceeds in multiple disconnected directions at the same time. Such is more than the case with Angels & Demons, which attempts to be a crime caper, occult thriller, sci-fi doomsday flick and religious landmark travelogue all at once, and pretty much ends up being none of these.

Literally leading viewers around in circles by the nose through fake Vatican City sound stage church labyrinths (church officials denied permission to film at the actual sites), Angels & Demons will leave audiences potentially more exhausted from the chase than Tom Hanks himself, as the amateur spiritual gumshoe, Robert Langdon. Apparently a glutton for punishment, Langdon returns after his hiatus following The Da Vinci Code prequel escapade sleuthing around menacing born-again relics. Langdon is again summoned to the Vatican to investigate death threats against the College of Cardinals after the passing of the current pope, and the beginning of a process to choose a cardinal to replace him. 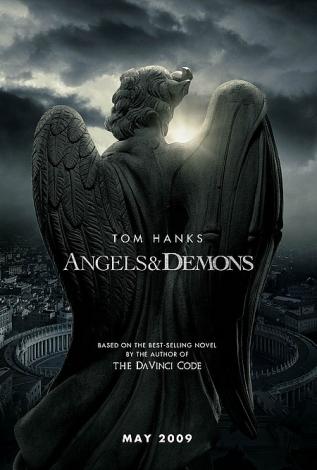 Meanwhile elsewhere in Italy at a futuristic science lab, a substance known as anti-matter and professed to hold the secret of divine creation of the planet, has been stolen, the mystery perpetrator leaving behind the plucked eyeball of a research assitant in the women’s restroom. Which leads scientist Vittoria Vetra (Ayelet Zurer) to join Langdon in the hunt for the killers and the swiped anti-matter.

Threats are broadcast to kill cardinals one by one and eventually blow up the Vatican, and Langdon and sidekick Vetra, for all their egghead attributes, never stop to ask why. Suspicions begin to abound as well, that this overly busy plot stuffed with hocus pocus verbal jargon, and already silly beyond belief, would rise hopelessly over the top if anybody paused to ponder this central question.

Meanwhile, Ewan McGregor turns up as Camerlengo Patrick McKenna, a fanatically devout underling of the recently deceased pope. There is also an unfortunate detour placing an extinct cabal called the Illuminati, who were men of science engaged in a power struggle with the once almighty Catholic church, under suspicion as persons of interest, even though they passed on centuries ago. And while some of the chillingly gothic action sequences can be characterized as mesmerizing, the insistently pounding, caustic and needlessly repetitive occult score is hopelessly oppressive.

At the heart of Ron Howard’s Angels & Demons is quite a formidable, timely theme, touching on terrorism as a primarily politically convenient myth and highly effective strategy for frightening and subjugating populations to the will of entrenched authority. But this crucial point is essentially lost, in a narrative that similarly indulges in intimidating, spiritually loaded language to disorient and mystify movie audiences.