Michael Moore has staked his career on controversial documentaries exposing the dangers associated with everything from the outsourcing of jobs (Roger & Me) to the easy availability of guns (Bowling for Columbine) to the Bush Doctrine of unilateralism (Fahrenheit 9/11) to the profit-oriented healthcare system (Sicko). While many hail the intrepid iconoclast as a populist providing a valuable service as a cinematic whistleblower, there are also certainly those who deem his anti-establishment, anti-corporate antics as a combination of self-aggrandizing and unpatriotic.

Only folks who fall into the latter category are apt to appreciate An American Carol, a shameful spoof which takes cheap potshots at Moore ostensibly for the amusement of right-wing zealots. The picture was written and directed by David Zucker (Airplane!), the original inventor of the lampoon genre along with his brother, Jerry.

This film features Kevin Farley in the starring role as Hollywood moviemaker Michael Malone, a thinly-veiled caricature of Mr. Moore. The plot is very loosely based on Charles Dickens’ A Christmas Carol, except that here Scrooge (aka Michael) hates the Fourth of July holiday instead of Christmas. The simplistic premise has him not merely being un-American but the unwitting dupe of a cell of radical Islamists planning to blow up Madison Square Garden.

Narrated by Leslie Nielsen in a series of flashbacks shared with a group of attentive youngsters gathered around a picnic table, the story unfolds in post 9/11 Afghanistan. There, we find Michael naively accepting $10 million in financing for his next project, “Fascist America,” from a trio of Taliban terrorists he proceeds to bring back to the States. Fortunately, he is visited by three ghosts, that of General George Patton (Kelsey Grammer), President John F. Kennedy (Chriss Anglin) and country singer Trace Adkins (himself), who take turns trying to show the Prodigal citizen the light in time to avert the impending disaster. 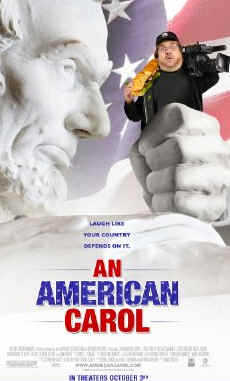 While a few of the film’s first jokes revolving around suicide bombers might be deceptively palatable, it doesn’t take long for the humor to turn twisted and be subsumed by a heavy-handed political message. Director Zucker resorts to his trademark slapstick, silly skits and sight gags to poke fun unfairly at Michael Moore and a host of liberal causes, including global warming, nationalized healthcare and gay rights.

Along the way, ACLU attorney are depicted as zombies who deserve to be shot on sight, student demonstrators are demonized for exercising their First Amendment rights, and Moore is repeatedly ridiculed for being a traitor who doesn’t support the troops. Less a legit satire than a scary soap box in service of a mean-spirited agenda. A dead giveaway is the cast which boasts a bevy of arch conservatives like Bill O’Reilly who gets to take delight in slapping Michael Moore right in the face.

PG-13 for profanity, drug use, irreverent humor and crude content.