In no way a Disney extravaganza, though Walt Disney happens to be the great uncle of American Violet director Tim Disney, this raw, heart wrenching investigative docudrama uncovers the sort of discomforting, concealed when not buried history that in an odd trend lately, is more likely to make its way to the big screen than the news headlines. And just as commendable, is Disney’s inclination to bypass, though not entirely, the usual condensing of complex social ills into stock villains.

Young African American actress Nicole Beharie is radiant in her first starring role as Dee Roberts (based on the actual case of Regina Kelly), a 24 year old rural Texas waitress and struggling single mother of four daughters, who along with many of the African American youth residing in her low income housing project in Melody, is framed and swept up in a drug raid. Though these mass arrests are apparently nothing new in this small town ruled with an iron fist by the racist local authorities, Dee’s courageous refusal to accept a guilty plea bargain and insist on her innocence despite seemingly insurmountable odds, including loss of her job and potential custody of her children to an abusive old boyfriend (Xzibit), was unheard of. 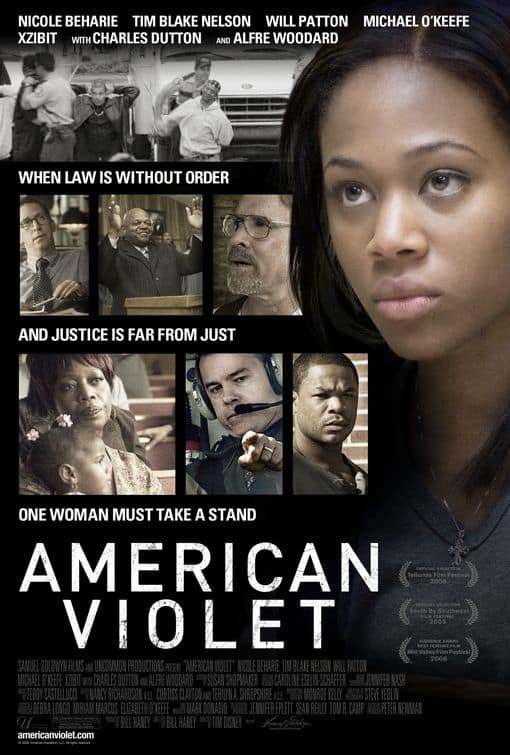 And when an ACLU legal team from up North headed by David Cohen (Tim Blake Nelson), along with local white attorney Sam Conroy (Will Patton) champion her cause, a vile pattern of injustice is uncovered. Among the deplorable details that come to light in the film and really did transpire in Melody, are frequent drugs sweeps as a source of income for the town, from funds provided by the Feds based on the number of drug enforcement arrests, and as a post-segregation form of disenfranchisment because convicted felons permanently lose the right to vote.

The violet of the title refers to Dee’s wilting house plant, which miraculously springs back to life because of her refusal to accept defeat and allow it to perish. Also a symbol of unbending resilience is Will Patton as the rock solid, quietly determined attorney who must face off against his own town while defending the black community. He conveys, along with Beharie, an uncommon dignity and passion celebrating the triumph of the human spirit against overwhelming odds. And that these shameful events transpired in the United States as recently as 2000, lends an extraordinary dimension to this devastating, simultaneously intimate and political drama.

On a side note, and possibly further indication of the progress we may hopefully be making as a family, in both the national and personal sense of the word, is that while the director’s great uncle Walt Disney was among the chief friendly witnesses volunteering for The House Un-American Activities (HUAC) in 1947 to denounce people in the Hollywood film world as communists and drive them out of the community and destroy their lives, Tim Disney has chosen a far different path. In addition to American Violet, he produced the exemplary documentary The Price Of Sugar, about the exploited Haitian sugar slaves in the Dominican Republic today, who have been starved, beaten, disappeared and malnourished, even as other far more privileged foreigners frolic in the waters of the DR’s tropical tourist paradise nearby. The film is out on DVD this month, from New Yorker Home Video.