In the late Seventies, a half-dozen Congressmen along with a United States Senator were caught on camera taking bribes from FBI agents posing as wealthy Arab sheiks. The elaborate sting in which the disgraced politicians became ensnared was code named Abscam, a contraction of Arab Scam. 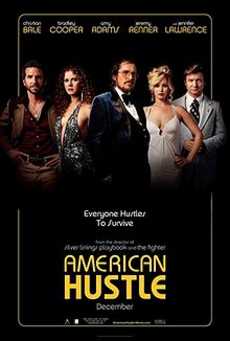 American Hustle is a visually-dazzling retro dramedy revolving around a fictionalized account of that embarrassing chapter of the nation’s history, Set in New York and New Jersey against the gaudy backdrop of the decadent Disco Music era, the film was written and directed by David O. Russell, Hollywood’s go-to guy blessed with the golden touch in recent years.

Here, David O. has produced another engaging and entertaining production featuring a plethora of powerful performances. This one co-stars Christian Bale as con artist Irving Rosenfeld and Amy Adams as his equally-mischievous British mistress, Sydney. They play a pair of small-time crooks pressured to help the Feds catch bigger fish in order to avoid prosecution.

Reluctantly, they cooperate with Richie DiMaso (Bradley Cooper), an ambitious, if flamboyant, FBI agent who draws attention to himself by curling his straight hair and wearing trendy clothes. Self-protective Sydney flirts shamelessly with the fashionable G-Man, feeling little loyalty towards her partner in crime who’s dragging his feet about filing for a divorce from his wife.

But when blowsy Rosalyn Rosenfeld (Jennifer Lawrence) realizes that her philandering hubby has been cheating, the trashy loudmouth decides to bring the drama, getting even by seducing a shady character (Jack Huston) she has no idea is under government surveillance. Generating great hilarity, these tawdry love triangles escalate into attention-grabbing distractions that threaten to wreck the supposedly covert operation.

Meanwhile, the naive Mayor of Camden (Jeremy Renner) is being manipulated by Irving to introduce a notorious mob boss (Robert De Niro) as well as the aforementioned corrupt politicians to Sheik Abdullah (Michael Pena). However, the hapless FBI looks more like the Keystone Cops when the agent trying to pass as an Arab can’t speak his native language when challeneged.

Who knows whether any of the ridiculous incidents recreated here ever actually transpired? But guess what? You don’t really worry about the truth when the laughs just keep coming and the witty repartee remains so inspired.

Another memorable masterpiece cleverly crafted by the oh so talented David O!

To see a trailer for American Hustle: