Several weeks ago, just around the corner from the radio station where I work on Wall Street in New York City, Ruslana Korshunova, a stunning twenty year old rising star runway model from Kazakhstan, jumped to her death from the 9th floor terrace of her luxury apartment, her body smashing into the street below. And while you might have thought she had everything to live for, Darryl Roberts’ documentary America The Beautiful, may indicate otherwise.

Roberts explores with both indignant passion and a keen sense of principled protest, the billion dollar beauty industry in this country that profits off peddling a nearly impossible-to-attain standard of beauty. And, while insuring a permanent and loyal following of obsessively image-conscious female consumers by basically, well, just making them feel bad about themselves.

America The Beautiful explores just about every facet of this massive commercial enterprise dedicated to perpetrating a universal sense of female inadequacy, in a culture where you’re told it’s all about how you look, not who you are, including deceptive advertising and frequently dangerous beauty products. And ironically, disfiguring cosmetic procedures (including designer vaginas and even canine testicle implants) by apparently perfectly legal uncertified plastic surgeons, ordinary doctors who learned to ply their lucrative beautification trade typically at a one day symposium carving up tomatoes. And the US military as well is seen exploiting this desperate craze, by offering free breast implants in recruitment ads to women who sign up. 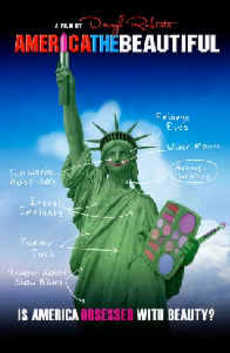 Threaded throughout this scathing investigative inquiry, is the disturbing and at times heartbreaking spotlight on the tragic rise and hasty fall of overnight LA supermodel sensation Gerren Taylor. It seems that while this young African American girl was considered at the height of her breakout ‘adult’ modeling career to possess the perfect stick figure proportions at the ripe age of, yes, twelve, by the time the size two, six foot adolescent turned fifteen and her adolescent hips began their natural process of rounding out, she was deemed over the hill and dumped for being, in her own words, obese and ugly.

What Roberts sadly concludes, is that the entire American beauty industry exists to make tons of money putting females down, through bombarding every woman with forty thousand ads a year featuring models who essentially don’t exist because they’ve been photograpically altered to look perfect. This, in country in which five percent of the planet’s population is subjected to forty percent of the advertising in the world.

And a life doomed to low self-esteem may be the least side-effect of this conformist body image culture destructive in the extreme. The obsession with looking perfect has led to an epidemic of dangerous starvation diets, chronic depression and even death among young girls driven to bulemia and anorexia.

One mother grieving for her teenage daughter who died from bulemia, is stricken with guilt because ‘I insulted my own body all the time’ in front of her. Another recalls how puzzled a woman she met in Africa was, when learning that she as an American female didn’t love her body. Insisting that all women are beautiful each in their own way and that she loves her own body entirely, the woman told her, would you love that tree over there any less, because it doesn’t look like another tree?

And so visibly upset is Roberts himself by these revelations he had set out to discover – and how females are tormented from ever earlier ages about their body parts – that at one point he declares that he’s ‘calling up every man I know to tell every woman they know, how beautiful they are.’ America The Beautiful, nourishing food for thought as a remarkable antidote to female self-loathing in a calorically depriving culture.