Simultaneous parody and homage, the 50s sci-fi spoof Alien Trespass sets a consistently amusing tone somewhere between sentimentality and satire, though with less emphasis on the latter. A slick compilation of the best and the most campy awful vintage space invader screen hysterics of that period, Alien Trespass sustains a kooky, always good-natured balance between reverence and ridicule.

Eric McCormack is Ted in Alien Trespass, a nerdy Mohave Desert astronomer who witnesses a strange object falling from space near his home, and heads off to investigate what turns out to be a spacecraft from another planet. The lone robot passenger on board, Urf, snatches Ted’s body for a bit to go capture some of his insatiable eating disorder space monsters called Ghotas, that escaped from the ship upon crash landing on planet earth. And they’re now running around town dining on humans.

The film is directed by R.W. Goodwin (TV’s X-Files) and based on a story by retro sci-fi bakery owner, James Swift. And while audiences today weaned on grossout fare may find the movie a tad to tame in comparison, transgressions abound that might have given the Hays Code movie censorship cops back then a couple of coronaries. Including far too anachronistic bawdy dames with flirty libidos, and married couples – gasp! – sleeping in the same bed at night. 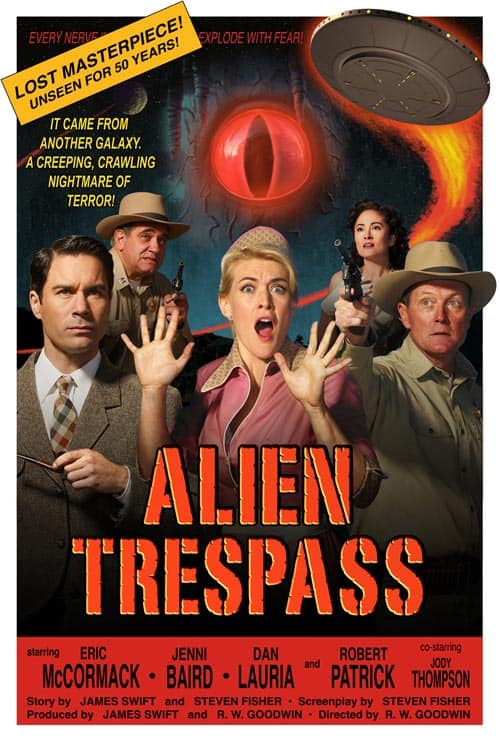 Alien Trespass is a pleasing interplanetary popcorn movie boasting all sorts of memory lane surprise sightings along the way. But settling for strictly satire lite instead of delving into a little of the dark side of America back then that fueled those paranoid Red Scare flick cravings, seems like a seriously missed opportunity, in between the zany hijinks.