The bad news is that Carrey in his eagerness, is completely unrecognizable in emaciated and beaknosed Scrooge parody makeover, as he melts irrevocably into his multiple personas.

Written and directed by Robert Zemeckis (Forrest Gump, Back To The Future, The Polar Express), this Christmas Carol suffers a worse identity crisis than Scrooge himself. Clinging literally to the Dickens classic source novel, the film at times strives to break out of its claustrophobic stagey theatrics and propel Scrooge and his supernatural helpmates into outer space, as if in takeoff into an entirely different futuristic comic book movie. 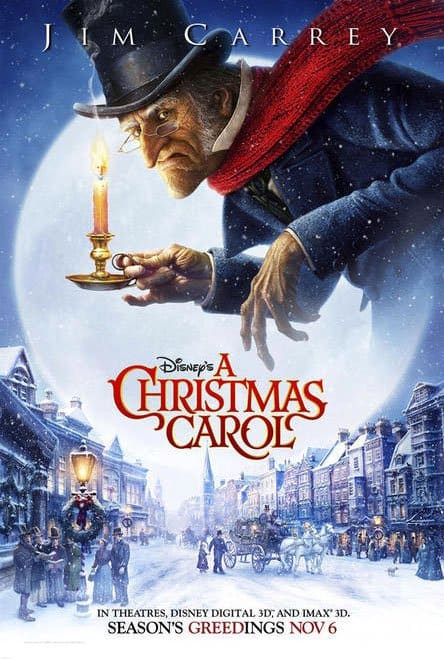 And while the latest, primarily lethargic IMAX/3-D vision of this vintage tale is much too self-serious and dark (even improving at times with its murky visuals, by removing the 3-D glasses) to enchant kids in the audience, adults are likely to be turned off as well by the Carrey/Scrooge intermittent standup curmudgeon’s cartoonish flights of fancy into sidebar unimpressive physical antics, that have nothing much to do with the story. To top matters off, Gary Oldman doing Bob Cratchit, Tiny Tim and Marley simultaneously, borders on Christmas yarn spinning sacrilege.

Veering between period piece Victorian insularity and space age hi-tech gimmickry, A Christmas Carol also unavoidably projects an oddly outdated perspective. For how many in the audience can’t help but agree with cranky Scrooge that Christmas has become a distasteful affair, drowning these days in commercial excess. Or the not uncommon liberal-minded opinion that the government not individuals, should tend to the welfare of the economically unfortunate. So three cheers for Bah Humbug!