The second movie in a week following The Grand, to treat card playing as an exciting spectator sport rather than, say, about as thrilling as watching fishing for two hours, 21 is an offbeat cautionary tale basically warning all those impulsive casino-bound eggheads out there that losers come in all IQ’s. Adapted from the Ben Mezrich bestseller Bringing Down The House and directed by Robert Luketic (Legally Blonde, Monster-in-Law), 21 is loosely based on the true story of six MIT (Massachusetts Institute of Technology) math geniuses who took the Vegas casinos for a ride in the 1990s, and suffered the consequences.

Kevin Spacey is mysterious MIT math professor Mickey Rosa, the delightfully malevolent mastermind in 21 who handpicks the sharpest brainiacs out of his classes to train after hours to count cards at the blackjack tables, and beat the odds. Ben (Jim Sturgess) is a local Boston kid from a poor home who is coaxed into the straight-A gang against his better judgment, in order to raise the $300,000 in cash needed to attend Harvard Medical School after graduation from MIT. There’s also the matter of seductive coed Jill (Kate Bosworth), who may or may not be hitting on Ben in order to lure him into blackjack team. 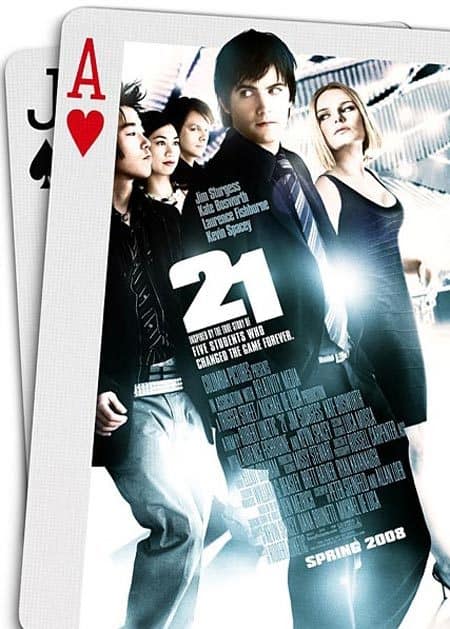 Once the budding con artists pass their initiation rites in a seedy underground Chinatown gambling dive, it’s off to Vegas where ‘dorm rooms turn into high roller suites and bicycles are upgraded into stretch limos.’ But there’s a definite downside to this extravagant lifestyle, when the team discovers they’re under surveillance by old school casino security guard Cole Williams (Laurence Fishburne). Williams is himself desperate to beat the odds against being put out of work by hi-tech surveillance software, and he takes particular enjoyment in smashing the faces of cardsharks fleecing his casino by card counting, an apparently legal but exceedingly discouraged pastime. You might say that if Ben’s got the gambling disease, Williams definitely has the cure.

21, which refers to both the game and the milestone of these college students reaching that age, as they approach graduation and either embrace maturity or wreck their lives, breezes along as if knowledge of this con game were a given. Which veers into risky territory for any movie, when the actors seem to be having loads more fun than the audience. As for those female members of the team, though they were supposedly chosen by Rosa for their math skills, they mainly seem to hang around to look cute in scanty attire and flirt with the guys doing all the serious stuff. Which makes you wonder if they got into an exclusive joint like MIT on athletic lap dancing scholarships, or some such. And Spacey as the deranged professor, has got to be setting a new record here as the worst teacher on the planet. Send the man to detention, like permanently.

The film, with its stylized, dazzling surfaces and twisted, noirish alternately hip and moody atmosphere, does impress with its central stormy romance. Namely this society’s obsessive love-hate relationship with money, and how the desperate need to possess it can summon our worst instincts, and in the process corrupt and destroy people. There’s also a message of sorts in the story, amid all the murky machinations and blackjack hustling, and it’s that gambling makes a mess of your life. So just, well, deal with it.