While the prediction of the demise of planet earth in 2012 was announced centuries ago by the Mayans and has since been considered in varying degrees by astrologists, numerologists and scientists, now Hollywood has stepped forward to toss its own scenario into the mix with Roland Emmerich’s lavish doomsday thriller, 2012.

A high-tech disaster guru who in a lesser lifetime might have excelled as head of a hi-rise demolition crew or the guy with the end of the world sign patrolling your neighborhood, Emmerich (Independence Day, The Day After Tomorrow) doesn’t mess around when intent on messing up the world for good. But his pop apocalypse multiplying man’s worst fears, always goes down easy with a side order of popcorn. 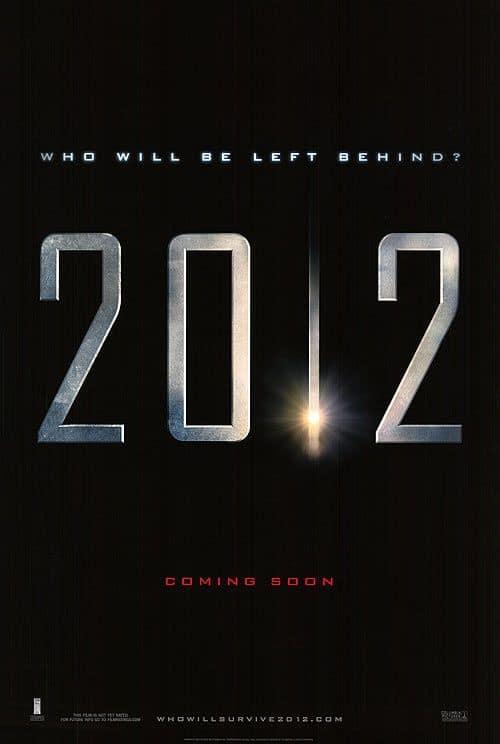 As scary geographical events begin to escalate around the planet as that fateful date of 12/21/12 approaches, including major quakes and tsunamis, ordinary citizens go about their daily lives while politicians, tycoons and scientists fret in secret. In other words, most people are doing pretty much what they always do when dire predictions about the world come to light – nothing.

And for West Coast bottom feeder novelist Jackson Curtis, the fact that the ground is shifting under his feet more than a little lately, is the least of his worries. It’s a particular downer of a day as Curtis fetches his kids from the estranged ex-wife (Amanda Peet) he still longs for, while under the suspicious watchful eye of her new boyfriend, and heads over to Yellowstone National Park for a family outing.

And as cities appear to be getting cooked from below and disintegrate in what is described as a microwaving of the planet, the majority of ho hum folks can’t seem to make up their minds whether to flee the end of the world, or do the laundry. Not so for the worry wart US president (Danny Glover) and nervous wreck government geologist Adrian Helmsley (Chiwetel Ejiofor), who remain stubbornly solution oriented in a seemingly hopeless situation.

But the only guy around who seems to have a handle on exactly what’s going down, is Woody Harrelson’s Yellowstone hairy woodland hermit and conspiracy theorist, wouldn’t you know it. Who broadcasts frantically on web radio about impending doomsday from his mountaintop perch, before ill advisedly bonding with a volcano. But the only ones who seem to be giving a listen to the suspected madman are Curtis, and the watchful US military lurking about.

Accumulating cracks in the earth’s surface aren’t the only issues plaguing this movie, there are plenty of cracks in narrative logic as well, as earth’s expiration date approaches. Including exactly how a couple of futuristic neo-Noahesque arks are going to simply sail off into the sunset with financially endowed folks who can afford the high price tag cruise, while leaving the rest of humanity behind to fend for themselves.

An overload of half baked individual stories aside, 2012 is certainly a super-scary ride as skyscrapers topple and tsunamis bury entire countries underwater in split seconds. While Emmerich proceeds not without some comic relief mischief in mind on occasion, as when an overly enterprising Russian with a mean geriatric right hook schemes under the sway of the new capitalism, to take along a fleet of luxury cars with him on a gigantic lifeboat of sorts, to safe haven if not the afterlife.

But the film’s repetitive disasters that peak far too often with a running time of nearly three hours, even as the kindness of strangers is at a premium and rarely kicks in, can be more exhausting than terrifying, and tends to veer towards cinematic overkill. While a basic principle of moviemaking in thriller mode is suspected of being violated a lot more than once. Which is that characters in a movie, like the rest of us, are entitled to expire only once in a lifetime. In any case, despite these various side issues, what we have here undeniably, is Apocalypse Wow.