Brainy British beauty Keira Knightley just can’t get enough of erotic period romances, and her latest turn as an artistocratic seductress in Joe Wright’s literary adaptation Atonement, is no exception. Both epic in scope and disarmingly emotional in intensity. Atonement finds Keira’s tragic hottie Cecilia paying for the guilty pleasure of an innocent stolen kiss from a servant’s son (played by James McAvoy), with a lifetime of suffering and personal pain. In this conversation with Keira, she described her great love for the project, and also weighs in on the comparative kiss-ability of her various leading men, including Atonement’s James McAvoy and that bad boy pirate more recently turned scary barber Sweeney Todd, Johnny Depp. 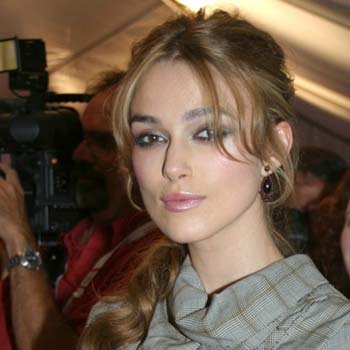 Your character Cecilia has quite a fashion sense.

Keira Knightley: Yes, I’m sure that if you were rich back then in the ’30s, it was a very glamorous period. It was incredible clothes. I saw her incredibly clearly when I read the script, and even more so when I read the book. I think she’s a brilliantly drawn character. Not particularly nice when you first meet her at the start of the film, but I thought there was incredible humanity to her, and multiple layers to her. And the fact – and this sounds very slouchy – that she’s redeemed by love, by the sacrifice, by walking away from the family, and the rest of it. I don’t know, I just thought she was beautiful.

How would you characterize your own look, like your red carpet look vs. your street look?

KK: My red carpet look is created entirely by people other than myself! And my street look is…scruffy!

This is your second time working with director Joe Wright, so was it any harder?

KK: No, it was much easier. We’ve always had an incredible creative relationship, I’ve been very lucky. I think the history between actor and director is as important as the on-screen chemistry between actors. And for some reason, we’ve just always clicked. We got to the point where he didn’t have to say anything, I just knew what he wanted. Which is an amazing place to be. We’re friends, and we really get on. So it’s always a very happy relationship. But he wants collaboration with everybody, and he wants discussion. And I find that very exciting.

Is it true that you changed characters in Atonement?

KK: Yes, he originally offers me the middle Briony. I read the script, and it just made me sob and sob. For some reason, I had just technically fallen in love with Cecilia. We went out to lunch, and I pitched him Cecilia. And he pitched me Briony. And we were obviously so good, that we managed to convince each other! But the end of the lunch, he wanted me to play Cecilia and I wanted to play Briony. It got very confusing, so it took another two lunches to sort out what I was going to play! I’m glad it was Cecelia.

Did you delve into that historical period?

KK: I’ve always been fascinated by the period. I think anyone that lives in London, a lot of cities in Britain, you see the scars of the Second World War all over the city. So it’s hard not to be interested in it. So, yes, I really liked researching it, and researching the British films of that period. Although I knew a lot of the American ones, I didn’t know the British ones as well. We had three weeks rehearsal before we started, and a lot of that time was spent watching mostly David Lee and Noel Coward’s collaborations like “In Which We Serve” and “Brief Encounter. ” Which was completely fantastic.

What about the hype attached to this film in a wider cultural sense? Is it good or bad for them?

KK: I always think it’s wonderful when you’re involved with a film that people actually like. Here the hype is based on the fantastic reviews that we’ve got, that people have gone to see it in the countries where it came out, and said, “I really love it.” So that’s positive. I think when you start talking Oscars and mentioning that in the same sentence, then that’s always going to be good, it means something went right. I think it often means that if you don’t get the nomination, it’s somehow seen as a failure. And I don’t agree with that. If we got nominations, it would be completely fantastic. If not, this is a project that we’re all really, really proud of. And it wouldn’t devaluate my estimation of the project if we don’t get the nominations.

Speaking of awards, what have been some of your favorite movies this year?

KK: I like “Michael Clayton.” That last shot of him that goes through the credits, is amazing. And I loved the opening monologue by Tom Wilkerson, that was wonderful. I thought Marion Cotillard in “Le Vie En Rose” was astonishing too, and I loved Into the Wild. I got so inspired by that. I saw it with some friends, and we talked about it all night afterwards and the next morning. You can’t ask more from a film than that. And there’s a really exciting movie from Germany now called “The Counterfeiters.” The main guy in that was unbelievable.

Atonement is a literary adaptation. What was your favorite book as a child?

KK: I think actually it was “Pride and Prejudice.” I was totally obsessed with it from the age of eight.

Now about kissing James McAvoy in this movie, tell all.

KK: They are all good kissers, and they have nothing to worry about!