It’s not every day that your life in a movie and the real world converge more than just a little. But that seems to be the case for big and small screen rising star Katherine Heigl, with her marriage to longtime singer boyfriend Josh Kelley on December 23rd, and her tragicomic weirdness as a bridesmaid at the moment in Anne Fletcher’s 27 Dresses.

A combo befuddled and ecstatic wardrobe-challenged Katherine was having her own bridal gown issues just before the wedding, but took time off for this interview. Not that the make-believe Grey’s Anatomy surgeon shouldn’t know about what it takes to put together a stitch or two. But maybe 27 Dresses screenwriter Aline Brosh could offer some sage advice, since she likewise scripted The Devil Wears Prada, and should know what she’s talking about. The famously ambivalent Knocked Up star who’s more on the knocked out side these days by too much on her plate, was also prodded about her life imitating life lately, and a rather strange explanation for her transformation from dedicated slacker to determined workaholic. 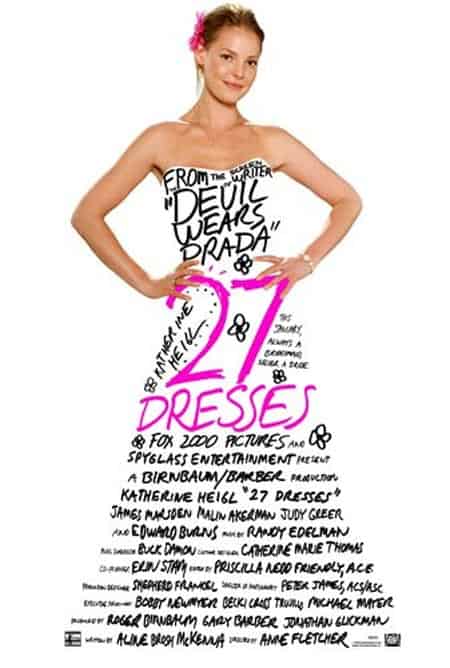 Did you ever imagine you’d have a wedding movie, and get married at the same time?

KATHERINE HEIGL: Fox just decided to release this in January. So that’s not my fault! It was just very coincidental timing. I had been planning my wedding for a year-and-a-half. But I thought it was interesting, because both Malin (Ackerman) and I were planning weddings during the movie.

Malin actually went off and got married, and came back to work. And there was a ton of wedding talk. Definitely all the details, all the planning, and we hoped the day would turn out.

And it was just really funny to see Malin come back to work. She could not stop saying ‘my husband,’ over and over! It was awesome. And it was exciting.

Do you want your own wedding to be like the one at the end of 27 Dresses?

KH: Well, I’m having a smaller wedding! So it’s a totally different vibe. What is kind of great about it is that I got to have the best of both worlds.

In fantasy land, I got to have the beach wedding that was beautiful, fabulous and wonderful. And hopefully, my wedding will be just as nice.

Do you have good or bad memories of weddings?

KH: My sister got married in October, and I was the maid-of-honor. That was the first time that I really had the role, for real. But I wished it had happened before the movie, actually. I would have had a better perspective on why my character Jane is so insane!

You know, it’s a stressful role. Because you want to make sure that you take care of everything that needs to be taken care of, so that the bride herself will have an amazing day.

It’s also kind of a big honor, because I adore my sister. Like the fact that she wanted me by her side that day, was really important to me. But, it’s stressful. I wouldn’t do it twice in a day, let alone every other weekend.

You’ve really taken off with the success of Grey’s Anatomy and Knocked Up. Are you ready for fame?

KH: I think that the nature of my career has certainly changed. Drastically! It just seemed to happen all at once. So it was hard to keep a perspective on it. But I think it’s just been the most gratifying and gracious year of my life, personally and professionally.

And I can only hope that 2008 is just as wonderful. But maybe in a different way. Because I’m scared to hope that it would be just as awesome as this year!

But this is super exciting. And it is always really nice that people actually watch your work and enjoy it. And that people will actually take that chance on me.

How about the downside of fame, the vanishing of your privacy?

KH: Yeah, there is the constant press coverage. And the constant paparazzi, and that kind of thing. That is very different now. No one used to care if I went to Ralph’s. But I still don’t care!

Which were your best and worst bridesmaid dresses to wear in the movie?

KH: My favorite of the bridesmaid dresses was, well I have a couple. But the one in particular was the Gone With the Wind one. I felt like… Scarlett O’Hara! Which was fun for me.

Then, I don’t know, the one I didn’t like. There were a lots. Like twenty-six of them!

How much are you like Jane in real life, and can you keep your mouth shut when you think you should?

KH: I have never been as selfless as Jane, I tell it like it is. I think most women have been in a position of being a real people pleaser, at one time or another in their lives. But I kind of got over that in my early twenties.

It took Jane a lot longer, and in a way more dramatic way. But I think that if you couch how you feel, too often, then you are not really being true to yourself. You know, you don’t know yourself, or what you want.

I’ve met and known women like Jane. They have taken a back seat to what everyone else wants. They don’t really go after their own happiness. But what I loved about Jane, was the progression of her character. She starts out just a doormat.

You understand why she doesn’t go after George. She’s his assistant, she works for him, and it would be unprofessional. But at the same time, it’s easier than proclaiming your love for somebody and being turned down.

So Jane has sort of chosen the path of least resistance for herself. And it ends up hurting her. But she is able to break the habit, and I liked that part.

Where do you get all your seemingly bottomless energy from?

You know, doing nothing but watching Survivor. So I have kind of this reserved energy. I’m good!

An amazing scene in 27 dresses is when you sing Bennie And The Jets.

KH: It’s my favorite scene. It was the most fun to film, and one of those great fantasy fulfillment moments. There is no way in hell I would ever do such a thing, or get drunk enough to do such a thing.

It was so fun to actually get to be that person for that day of filming. Jimmy (Marsden) is just stupid funny, so it made it really easy to play off of him. The only problem is that he can actually sing! He has a really great voice, which I thought was a really unfair advantage.

So I asked him to please work to sing badly! You know, so that I didn’t look like such an idiot. And it was a really long day, but it never got old. Take after take, it was just the most fun to do.

Any apologies to Elton John?