It’s not every day that you can get decked out superhero style in car fenders, and go gunning for the bad guys with a blow dryer. Which is why Jack Black’s turn in Be Kind Rewind as a goofy, accident-prone video store loiterer who messes up all the merchandise and has to team up with Mos Def’s clerk to make it all right again – sorta – was much more than a labor of love. The whole nutty proceedings, not surprisingly concocted by director Michel Gondry (Eternal Sunshine Of The Spotless Mind) as Black described in this conversation, give an entire new meaning to the notion of a remake. Black also shed light on the method to his madness for getting into his specialty of uniquely crazed characters, what’s up with The D’s music, and what he’s hoping is a brand new turn in his career, doing a ‘drama ass’ full moon of his bountiful bod up on the screen. 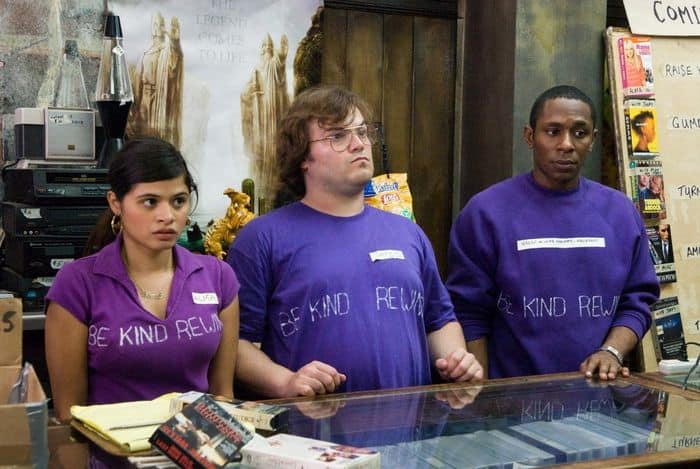 What’s with your hair?

JB: This was a full blonde hairdo, and it’s just growing out. I haven’t dyed it back to the original darker brown, because I’m lazy. But it looks stylish, it looks like I went to Vidal Sassoon.

Be Kind Rewind sounds like it was a blast to do. What were some of the most fun movies to put back together again your way, from scratch?

JB: Yeah, I loved doing Ghostbusters, Rush Hour, Driving Miss Daisy. And dressing up as Robocop. It’s all Gondry’s designs. Like basically car fenders for my legs, and a blow dryer for the gun and holster.

But he’s brilliant in so many ways, and he thought of all of it. My character works in a junkyard, and so all of the stuff was kind of built with junkyard parts.

You go a little crazy with all the things you do in this movie. What was the hardest part of all? 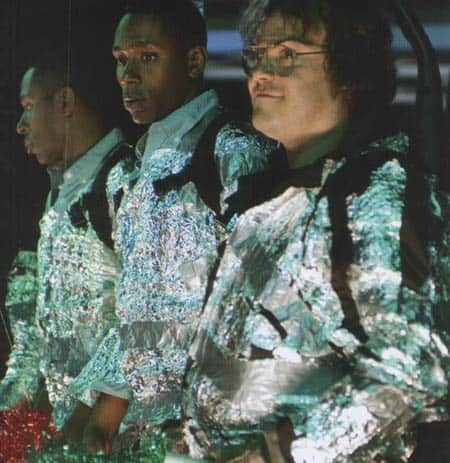 JB: The harder part was doing Rush Hour 2. When I had to fall into the garbage. I was like, Michel, can’t we put some pads underneath that garbage that I’m about to dive into?

And he says in his French, Non! There’s no time! And I did it and sure enough, I hurt my elbow. I got a scratch on my elbow. And he said, don’t be such a babee!

What about re-doing one of your own movies too, King Kong?

JB: Yep, we did a little King Kong too. It was cool. And it was pretty low-budget, this movie. But he makes up for it with incredible magic, and stuff. And depth perception, and camera tricks.

Like, let’s say I’m King Kong, and that over there is Roz. But you’re the camera, and if I do that and hold her like that, it looks like I’m a giant. It’s hard to explain. But in the mind of Michel Gondry, it makes sense.

But we did a lot of movies. And we did When We Were Kings, the documentary about Muhammad Ali. Strangely, I play Muhammad Ali. There were tons of movies that we did.

What’s your strategy for getting into crazed characters? 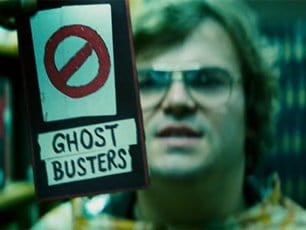 JB: I always ask myself if this is really how I would behave. When I try to do it in the voice of specific people, it kind of goes flat. So I’m better at just being in my own voice, and imagining myself in that situation.

Speaking of unusual new turns in your career, what was it like singing What’s New Pussycat in Korean for The Simpsons?

JB: That was fun. You saw that? I’m bummed because I set my Tivo to record it, and it cut off the credits. And I knew that my singing was in the credits.

How’s your love life, now that you’re a dad and changing diapers together?

What’s up with The D?

JB: I love The D and the music. We’re writing new songs for the big massive comeback masterpiece album. It’s powerful. I really love the first two albums, even though the second album didn’t make as much as the first one. And I don’t want the quality to go down for number three. So look for that around, I don’t know, 2012.

So I think that’s how it happened. Because we never back down from a challenge. And we never say no when it’s for a good cause. We like to ride in and save the day. And get all the credit for being good guys.

Why should everybody go see Be Kind Rewind, give us a cool plug.

JB: It’s very, very quirky and funny, and it could go over well. I know that when we were making it, we were swinging for the fences and having a really good time. But very creative and original doesn’t always translate to big box office gold.

And Gondry’s an unusual director with a very unorthodox style. So just straight up plot and story are not always the most important thing to him, as much as a feeling, or an amazing image.

What has surprised you most about being a dad?

JB: I didn’t know that I could feel so much for someone. I was surprised by my own awesome heart.

How are you adjusting to fatherhood so far?

Are you going to raise him Jewish?

JB: I don’t think we’re going to be real religious. But I might change my mind at the last minute. And go…You’re Jewish!