Horror founding father and gore guru celebre George Romero is not only a guy who’s long been consumed by a weird zombie fetish over the decades. Romero in fact, was pretty much the big screen alchemist who created the formula, with his classic Night Of The Living Dead, for all future horror fare to come. In person, he’s an odd mix of slightly scary and intimidating, and yet full of warmth and exuberance for the many fans that tend to flock around him, yes, even counting the press. Romero reflected back on his career and its significance during this sitdown conversation, and also weighed in on his new zombie outing, Diary Of The Dead. Including, what is scaring him mostly lately, like cyberspace giving him the creeps, and the big media that may in fact be one of the biggest monsters of them all.

Your Dead movies just keep coming back to life, like your zombies. What’s new and different with your latest, Diary Of The Dead? 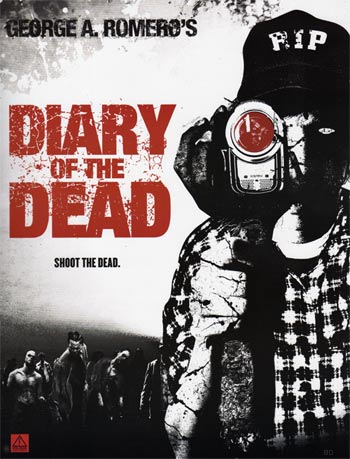 GEORGE ROMERO: It just seemed like they had lost touch with their roots. It seemed that it was approaching Thunderdome. And I thought, wow, this isn’t where we started. And I just saw it having to get bigger later on. Even though Universal basically allowed me to make that film the way that I wanted to make it, it was grueling and difficult, and I never thought that it should be going in that direction.

You know, all the zombie films that I have made have grown out of my observations of what is going on out in the world at the time, and I had this sense that I wanted to do something about this emerging media, this octopus called the blogosphere. Which to me is full of dangers wherein any lunatic can post anything. If Hitler was around now, he wouldn’t have to go into the town square, he would just throw up a blog. If Jim Jones were here now, all of a sudden there would be a million people drinking Kool-Aid. So, that struck me as dangerous.

And also, this obsession that everyone is a reporter, you know? I mean, yeah there’s a terrible tornado out there in Tennessee, and be careful folks. But go out there and get us some footage! So it just struck me that we’re living in this age of constant media, and that anyone like Joe Blow in Oshkosh can write whatever. I mean, people who listen to Rush Limbaugh already know what he’s going to say, and already agree. So, I think that the existence of these blogs is creating more tribalism than anything else.

I’m curious about where you see yourself in today’s cinematic landscape and if you’re worried about staying relevant.

GR: You know, I’ve never particularly worried about that. In the very beginning, I did. Like when people were initially writing about Night Of The Living Dead and calling it “essential American cinema,” and how political it was. I mean, that was all by accident. And we had cast a black actor in the lead of that film, never having been fully aware of the implications of that. In those days, the news was all shot on film, they didn’t use videotape. So, there were film labs in cities the size of Pittsburgh, and we had just finished the film. We had an answer print, threw it in the car and drove it to New York to see if anyone would want to show it.

And that night in the car, we heard on the radio that Martin Luther King had been killed. Now, all of a sudden the whole ending of Night Of The Living Dead takes on so much more resonance because of that. And I believe that we received a lot of undue credit do to the fact that the black guy gets shot at the end of the film. That was written in the script long before the character was ever cast, be it a white actor or black actor.

What do you think of the classic horror experience? I think that’s one of the things that makes this movie work, that you still know about creating fear and terror.

GR: I love the gothic. I love old movies, period. I’m an old guy, and still very old-fashioned in my tastes and techniques. Not only in horror, but in other kinds of films. I go to see a movie like Atonement and you know, it just doesn’t get to me. And then I’ll go home and turn on Turner Classic Movies and watch something like Brief Encounter and you’re this sort of giggling at it, and how corny it is. And by the end of the film there’s a tear in your eye.

But, it works. And I find that people today are trying to avoid that sort of emotion because they feel that it’s too silly, or too corny or whatever. I find that a lot of the emotions are blunted in contemporary films. But then again, that’s just me. But I’m older now, and I remember the older movies and how they affected me.

You’ve got some pretty pessimistic thoughts in Diary Of The Dead about humanity. Do you think that the human race is worth saving?

GR: Well, that’s my biggest frustration is wondering, are we worth saving? Jason, the character in the film, thought that he could help by documenting all of the carnage. And I do believe that he was seriously misguided. He lost sight of his own survival, and the survival of everyone in his own crew. To me, it’s then a reaction that the female character makes, in wondering if we’re worth saving or not.

Your Dead movies are on the contrary, so enduring. What do you think is the secret of their lasting popularity?

GR: I don’t know, I wish I could tell you, and I would keep trying to do it. I think that somehow, and if there’s anything I can say, I never took a job, if you know what I mean. I never did something just because it was a job. And I really think that people notice that. You know, I’m never just going through the motions,

I have genuine passion for what I do. And I think people like the fact that’s I’m doing, and it’s something that I want to do and not just working for the Company, if you know what I mean. I think I also have a maverick reputation because of that. And I think that maybe it has more to do with that, than with the films themselves.

What led to your life passion to make movies in the first place?

GR: The desire to make a movie! Yeah, we started out with this Bergmanesque film, sort of a coming-of-age film in the middle ages, and no one wanted anything to do with it. Then I read I Am Legend and adapted – well, actually ripped off! – the first half. And made it into Night Of The Living dead. So yeah, it was just a desire to make a movie.