You might say that Jessica Alba’s got an awful lot on her plate right now, artistically and medically speaking. After just coming out in two medical thrillers back to back – Awake and The Eye – Jessica is now about to get the medical treatment for real, as a prospective new mom. In this conversation with the hot, vivacious and pretty funny star, she talks about how motherhood may change her life in major ways, the telltale signs of The Eye kind of organ transplant psychological side effects that may have something to do with pizza and roller coasters, and how she feels about the negative stuff connected with being a sex symbol.

Hey Jessica, congratulations on all your success, and good luck with the baby.

JESSICA ALBA: Thank you very much. 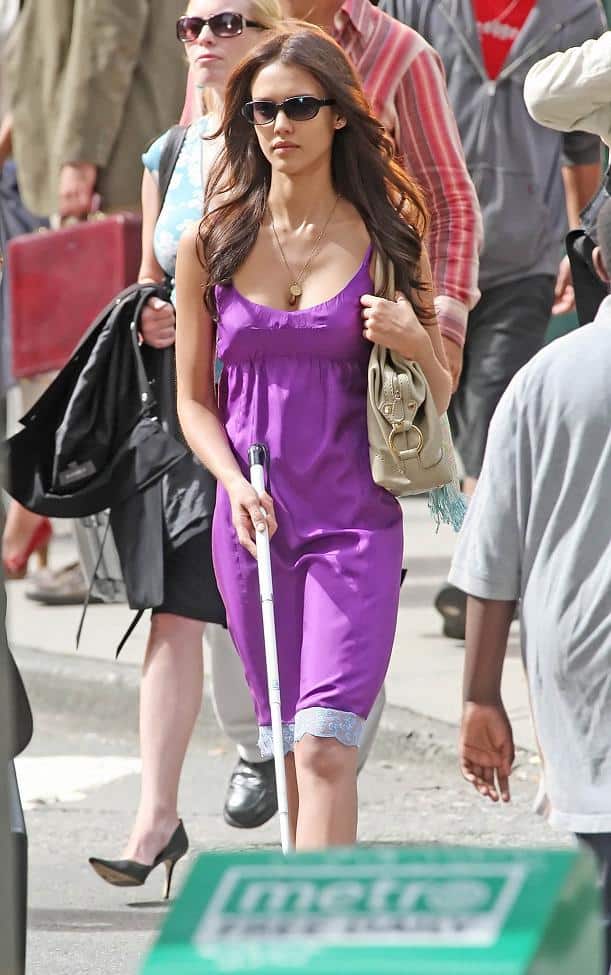 JA: You know what, I sound so bummed out right now. Of course I’m happy!

Where in LA do you live?

Is it in a general neighborhood?

Okay…And is there a question you always want to be asked, but no reporter asks you?

JA: Not really. Reporters get pretty in there! They get right into just about everything.

Have you picked out a name for the baby?

Have you picked out a name?

What are some of the ones you’re considering?

Do you think being a mom now, may change the kind of actress you are?

JA: I think initially I’m going to probably do maybe a little bit more character-driven roles, you know, kinda more indies and smaller budget stuff. Like not necessarily the big box office movies. Like the ones that don’t necessarily make it in the theaters. So I think it’ll be fun to kind of take more risks, and more challenging roles.

How did it feel to have to pretend to be blind for The Eye?

JA: I went to a blind orientation center in LA, and one in New Mexico. And I lived among people who were learning to deal with blindness, particularly in New Mexico. It was kind of like the one that I spent the most time at.

And I learned how to read braille, and walk with a cane. And label everything in the house. You know, just sort of learning how to exist as someone who has blindness.

And I did apply all of those things to my home, so that I could just practice at home with the sleep shades on. I also spent time with a girl who’s been blind since she was two. She’s a vocalist.

So she was really my inspiration, because she was so self-efficient and so independent. But I never knew anyone who was blind. And certainly any connotations I had with people who are blind in that they can’t be self-efficient or live like anybody else, was just thrown out the window. Because she was quite extraordinary.

So which was more difficult, playing the violin or playing blind?

JA: The violin was definitely more difficult. I had to be a soloist. And you know, you have to be kind of the best of the best. And people who’ve been playing that instrument since they were three years old, they practice eight hours a day and still don’t become soloists. They’re just in the orchestra.

So that was tough for me. Because I wanted to come off as realistic and believable as possible, in order for the audience to really take the journey with me in this movie.

But playing blind was quite claustrophobic. You know, when I first started wearing the sleep shades and walking around. And trying to exist, you know, normally. I felt confined and sort of trapped. And I had a few like freak-outs. So it took awhile for me to get used to it.

If you had to lose one of your own senses, which would be the worst for you to lose?

JA: If I was going to lose a sense, the worst I think would probably be blindness. Only because I’m so used to seeing. And, you know, I have a baby coming, and I’d like to see my child.

The Eye also deals with the whole idea of cellular memory, and that you absorb the thoughts of your organ donor. Do you believe in stuff like that?

JA: It’s kind of scientifically proven. And I actually met a guy this week who hated pasta. And after his liver transplant, all he wants to eat, like three nights a week he wants to eat pasta. And he lost thirty pounds.

And he didn’t like going to theme parks ever. And now he only likes when him and his wife go on vacation, he wants to go to theme parks. And go on scary roller coasters!

And then he found out that his donor was a 16-year-old boy who loved roller coasters. And he didn’t like sweets. Oh yeah, he started to not like any sweets – no brownies, no sugar. And I think that’s why he lost the thirty pounds! And the kid didn’t like sugar, loved pasta, and loved scary rides.

So it’s like you can’t really say that it isn’t true. Because this guy is living his life, and it’s completely different now with his new organ.

What was the worst part of making this movie for you, on the set?

JA: When I was playing the violin. Because it was so horrible, everyone wore earplugs! It made me feel so good. I’m like, but I’m playing the notes, it doesn’t sound like Beethoven?

How come you seem to play strong women, more than damsel in distress roles?

JA: Well, it’s funny that you say that. Dark Angel, yes. Fantastic Four, yes. Sin City, not really. She was kind of a damsel in distress. And I was kind of a victim in that movie. But more than anything, I definitely do play more dominant, stronger women than I do weak women.

I don’t know, probably because it’s kind of who I am. I’ve never been – I don’t channel the victim maybe as well as I can channel someone who can go in and do her own thing.

But you know, we’ll see what happens later. I might be able to channel that a little bit more, and find interesting roles in women who are victims!

Do you ever feel that being gorgeous is a negative in your life?

JA: I never base anything on my appearance, to be honest with you. I don’t think that people would hire me just because of that. There’s so many much, much cuter girls in LA that would do just about anything to get roles. And if it was just about looks, they would be getting them.

So I have to believe that I bring more to the table than that. And whether it’s, you know, likability or an appeal or something that’s more, you know, I don’t know. People see me, and it’s familiar because of Dark Angel and Fantastic Four, I don’t know.

What about being a sex symbol?

JA: The one movie that I was objectified in, and it was bizarre for me, was Into the Blue. Only because I didn’t know we were going to be in bathing suits. That was never the plan. They shot all the bathing suit scenes with the doubles before I even came for the first scene.

And in the script we were in scuba diving in wet suits. And I sat in all wet suits the whole movie. So that was one movie where I felt I got tricked. But I wasn’t the only one. It was Paul, it was Scott Caan, it was Ashley Scott, it was the other girl in the film. So it’s not like I was the only one in that movie. Just kind of, it was what it was.

Do you feel like you’re going to surprise all your fans with your performance in The Eye?

JA: I think a lot of people have seen me, you know, primarily in popcorn movies. And mind you, this one is as well. But this is a more complex character. It’s not as one-dimensional. She’s definitely grounded, and with more of a reality.

And she feels, I don’t know, just not as glamorous, I guess. Or, not as glamorized as the other characters that I’ve played.

How do you feel your life will be different, once you’re a mom?

JA: I have to believe that when you have a child and you have someone that, you know, needs you and needs your time, you kind of can’t be selfish anymore. And you have to consider that any time you spend away from your child, is invaluable.

So I think I’ll just probably be a bit more choosy, and not work for two years straight like I just did. But…I do have pregnancy brain now, where I get a blank completely!