Irish bad boy screen star Colin Farrell has quite a reputation for doing things strictly his way, and the manic-depressive hitman that he plays in Martin McDonagh’s gangster satire In Bruges, is no exception. Colin stopped by to talk about the film and show off his mysterious arm tattoos. He also described what it feels like to slug a woman in a movie, a little about what life is like if you’re not a morning person, and how it’s hard out there for a hitman, especially when a homicidal identity crisis kicks in. 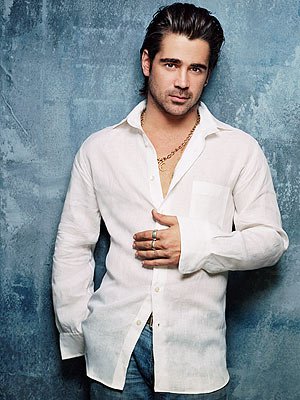 [Colin stops by the john first, before sitting down for the interview].

Are you all right in there? Don’t forget to flush!

COLIN FARRELL: [Stepping out of the john]: Hello. This is getting complicated. I want some W-A-T-E-R!

Those are cool tattoos you’ve got there on your arm. What do they signify?

CF: Uh…Drunkeness! No, it’s just various stages, when I was in particular moods. You know, I thought I’d like the mood to be remembered. And I obviously didn’t trust my mind enough!

Do you ever feel like you want to take them off?

So what kind of adventures did you have in Bruges?

CF: The hardest question I’ve heard yet. There weren’t any! No, it’s a magical place. But we arrived there in the middle of the winter. There was such a desolate feel to it. But it picked up as we got into the spring.

But I found Bruges fittingly oppressive. Because I was playing a character who’s suicidal. But it was me, not the city.

No drowning your sorrows in drink?

CF: Well, the beer, we had to strike that off the list. There was an irony in working there. No beer for me at this stage in my career, after hundreds of them. But the chocolate was grand, yeah.

How did you get into this intense character Ray, that you play in the movie?

CF: Hmm…I dunno. You just go wherever you go, and say it like you mean it. You know, it’s just all about character and story, and telling a good tale.

What was it like having to slug a woman in one scene?

CF: Ah, I’ve had plenty of practice! I’m typecast again. No, I worked it out with the actress, who’s a stunt woman. But you just have to…do it! But people come out of the movie thinking Ray’s intent was never malicious. Which is bizarre!

CF: I think he’s incredibly innocent. But it’s bizarre, everything he gets away with. There’s a purity to him, in the way he views the world and expresses himself. But he’s also very much like a child.

You know, he kills a priest, and hits somebody with a bottle. So my life was on the line, trying to validate that action! But I would never condone violence, against anyone. Like being hitmen is what they do, but it’s not really what they are.

Now, there’s that scene in the restaurant where Ray rails against some American tourists, for the Vietnam War. What was that all about?

CF: He hasn’t a clue what the f*** he’s talking about most of the time. It’s just something he heard on television. You know, that the Vietnamese died because of your aggression. He probably heard Muhammad Ali say that in a speech. And it probably impressed him, and stuck.

CF: It was lovely, it was a small town. It has an unexplored feel to it. like time has stood still, and maybe it’s a forgotten place. And I’d be driven there every morning even though it was just across the road, because I’m lazy! I’m not good in the mornings.

But I think they liked getting the recognition. But then you wonder, when the people of Bruges see the film, what will they think! You know, they’ll be like, ‘Bastards, they fooled us! ‘

But they were so happy that we filmed there, they even made up these maps of the city, with a picture of a gun on every location on the map where we shot the film. Capitalists!

Are you going back home to Ireland any time soon?

CF: It’s always great to go home. And it will be great to go home with a piece written by an Irishman, and starring Irishmen. There are lots of other kinds of people in the movie, but it feels very much to heart, like an Irish piece.

Do they roll out the red carpet for you when you go home?

CF: I bring my own! Nah, I keep my feet on the ground. I don’t make other people do my shit. I roll out my own red carpet.

What kind of carpet would that be?

Do they throw parties for you when you go back there?

CF: I dunno. I think In Bruges is opening the Dublin Film Festival. So I’ll have uncles and aunties, and mates will be there. So it’ll be cool, I’m sure.

Getting back to your character Ray, who is suicidal through the whole movie. How do you play that the entire time, without feeling suicidal off the set?

CF: You know, it’s just acting. F***, ya might be in a shady mood, or it might bring you down. A little bit! But you try as much as you can, to separate the two.

You know, one being reality, and the other being a heightened depiction of reality. Which this was. And all the knives in the drawers in my kitchen were taken away!

Hmm…Okay, thanks. This is a wonderful movie.