Shedding that combo goofy and good girl image of hers in movies like The Princess Diaries, Ella Enchanted and Get Smart may be a little complicated, according to Ann Hathaway, but she’s working on it. And though she plays a little bit at hide and seek during this conversation, in terms of how close she may or may not feel to her moody addict in recovery in Jonathan Demme’s Rachel Getting Married, Anne insists she’s into serious image makeover right now. But as far any personal get smart evidence lately or the lack of it lately, Anne confessed to trying her best not to sound like an asshole, deliberately dumbing down for some characters, crazy bouts of amnesia sometimes when it comes to spelling words with or without ‘t’s, and her funny hunches about the wicked ways of suburbia. 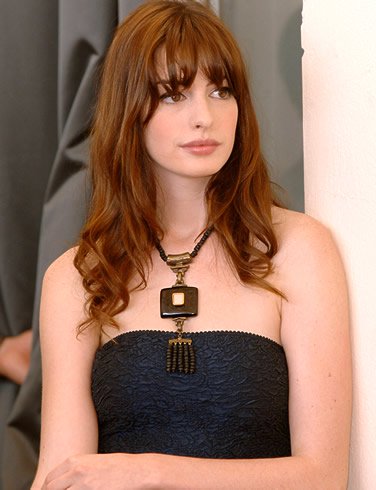 ANNE HATHAWAY: Hi. Hey, this is nice and intimate! But I have to tell you, I am so bad with names, so I may not remember yours. My mom asked me somebody’s name the other day, and I couldn’t answer. So I said, well what were they wearing? And when she told me, then I remembered the name!

But let me tell you, we could have a conversation right now like all about your kids and I could remember all that. But I will not remember your name! But I might say, how is your third rib doing? You know, if it was cracked. And that maybe happened like five years ago!

Hi there. And my ribs are fine. Your performance in Rachel Getting Married is amazing.

What about that Oscar buzz?

AH: I love how you just made my life sound so fabulous! I mean, I’m not gonna lie. It’s a huge compliment. I’ve never done work that was considered on that level. So that’s thrilling as an actress. Like what a breakthrough.

But it’s just October now. So it’s a lovely compliment. But everything must be taken with a healthy dose of perspective. And if people are still saying this at the end of December, then yeah, you know what? I’m gonna think about it a lot. But that’s a long way away!

So are you anything like your kooky character, Kym?

AH: That’s so funny. Because another reporter just asked me that. Kim was herself. But I’m not gonna lie. I never had to beat myself up in order to get her to cry. She is closer than anybody ever thought.

But I did it, I did it. And who knows if I will ever be able to do that again. And I’m sure I will get freaked out about something else. But for this exact moment, I am really, really happy.

So she never felt like work. She was herself, first and foremost. But I definitely could draw some similarities between her, and people that I know. And yes, I did tell them so!

And were they happy to hear that, or not?

That’s a pretty big leap, from lovable princess to freaky female in recovery. Was that heavy for you, to radically revamp your image like that?

AH: Yeah, that is exactly where I am at in my life right now!

Well, what made you go for it, and how are you handling bad stuff like that, ending up in the press?

AH: I’m sure it has a lot to do with my age. You know, for the first time in my life, I’m really comfortable in my skin. Like I think, I was tortured by, oh, my god I have just said this or that. And the bloggers are going to be like, Anne Hathaway was tortured!

I hear you. Did you have to audition for this role?

AH: I didn’t! John [Demme] saw The Princess Diaries, and he didn’t see me as a goofy young girl. He saw like a budding actress. And I was so amazed.

AH: Because nobody ever saw me like that. Well, maybe my parents! No wait, they’re gonna get mad at me for that. But John sent me the script with a note attached saying, which role

do you want to play?

So why did you choose Kym?

AH: Just that thing. I mean, not to sound like I’m a B.S.-ing actor, but I knew, I just knew. And when I read Brokeback Mountain, it was the same thing. You know, a note attached. And I just knew it was gonna be Lureen.

And with Kym, I just got her. Just her whole emotional makeup, that really appealed to me. Like once I understand something, I understand it for life.

And when I know something to be true, I can’t change my opinion about it. You know, I can’t go back and feign ignorance. And Kym just made sense to me. You know, from the first.

Anne, you have this honesty thing about you, where you just say whatever is on your mind. Where does that come from?

AH: Oh, that comes from my father. Yeah.

Do you relate to Kym’s whole drug addict thing?

AH: Well, I believe addiction is a disease, and that it’s genetic. I can’t tell youwhy, until they figure out why people have this disease. But I can tell you how it got exacterbated. Is that the right word? No, I think I put an extra ‘t’ in there!

Anyway, I think she grew up in this permissive household, where she probably saw people drinking and smoking. And she probably, you know, occasionally smelled weed.

But she’s this sort of extreme person. So she would always want to go faster and faster. And growing up in suburbia she probably, you know, started drinking at twelve or thirteen.

You think burb brats do that?

AH: I’m sure somebody brought over some weed, so they tried doing that, and kinda liked it. And probably by the time she was fourteen, somebody had gotten some cocaine, and so she tried that. And she really liked that! And then she wanted to do more, and more, and

Do you think that bad suburban mom of hers had something to do with it too?

AH: Uh…What are you hoping I’m gonna say! Well, her mother probably had her wild moments too. But I always saw her as yeah, yeah, yeah. She’s not the most open of people. And I think she had to distance herself from being a mother, there was stuff that was too painful.

So she’s trying to be a mother, but she’s also trying to protect herself. But I don’t want to blame Kym’s parents, I don’t want to. I think that it’s a complicated issue, and blame doesn’t do much. So..Is that an answer!

AH: However, I do think Kim’s soul is very evolved, and very mature. Especially at this point in her life, in how deep she goes, and how well she loves.

And that’s astonishing. And I thought, so beautiful. You know, that you have this girl who is struggling so hard, but never gets any credit.

So what are you up to next?

AH: I have a movie coming out called Bride Wars, with Kate Hudson. I turned around and made a movie in the opposite direction. Which is going to be like the glossiest, most commercial thing you’ve ever seen!

Sounds good. How did you and Rosemarie DeWitt, who plays your sister Rachel in this movie, get such intense and really smart chemistry going between you?

emotional makeup than the part has.

AH: Because otherwise you’re just chewing up the scenery. And putting yourself before the character and the story. And the language that’s used in this script, and the fact that Kym was not formally educated and that she is so comfortable with it, really informed her as a character. And her insane level of intelligence.

You know, how fast her mind is able to work. So yes, that did have an impact, in terms of just blowing the cap off the top of my imagination, and where I could take her.

How far did you want to push that?

Uh, no! But like making her as big and broad as you could.

AH: Oh, right…I’m sure somewhere on the cutting room floor, that there’s a myriad, of takes! You know, that have that. But I just gave the most truthful, dynamic performance that I could think of.

So I just concerned myself with telling the truth. And I always clear everything with John before doing anything. Because I have this fear of wasting film!

What’s that all about?

AH: Like if you mess a line on film, it costs like five hundred dollars! You know, if you mess up a line. And I just hate that pressure on me. I won’t bore you with all those Stories about that, but yeah, John was fine with it.

How about one story.

AH: Well, you know the scene where I tell the musicians to be quiet? Um…Yeah! But I was trying to be really diplomatic, when I couldn’t hear anything while we were doing a scene.

So anyway, I believe I said, are they gonna do that all weekend! And I didn’t tell anybody that I was gonna say that. So they all kinda sat up. And I just saw Bill Irwin’s face collapse in relief! He told me later, I was having the same problem with their music!

So that became a really organic part of the scene, and you don’t see it coming. And it gets a huge laugh in the movie. So I was really happy. That doesn’t answer your question. But I don’t have anything else to say!

Well, it ended up in the trailer too.