According to Amanda Peet, getting into panic mode about the end of the world, even for a movie, can be scary. But also funny too. Especially when under the assured and supportive hand of director Roland Emmerich, for the doomsday chiller, 2012. Other perks high on Amanda’s list while making this movie, as she described during this interview, were a roller coaster fantasy ride without having to actually hop on one, getting to be screen lovers more than ever before with her favorite leading man, John Cusack, and lots of little master of disaster inspiring moments to share with Roland. But today, it was mostly about craving a bagel. 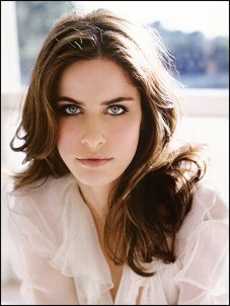 AMANDA PEET: Good morning. Oops, it’s not even morning anymore! [To publicist]: Thank you so much. Excuse me, I’m starving. I just ordered this bagel!

Please, munch away. So what was it like watching the production of 2012 unfold?

AP: It was certainly nothing like what the final product was. But I don’t know anything really, I’m just a dumb actor! The images were crude, like a videogame, but they still made me laugh, and think that this was going to be scary.

So it was kinda…shocking! And amazing. But I feel Roland is certainly bold, and the master of this genre. So…it was kind of a no-brainer! And Roland is so sweet. He never loses his temper, or raises his voice. He’s just so gentle.

And on a project of this scale with so many people, it was hard to understand how he just wasn’t a….lunatic egomaniac tyrant! And he’s none of those things, at all.

So I don’t understand how he gets anything done, being so gentle. And he’s just so gifted with these massive shitkickers. So while Roland is the master of disaster, he doesn’t know how to do it without making all these little intimate moments important too.

What is your take on this story?

AP: You know, we’re all really anxious, and we live in unstable times. And I definitely think he’s playing with that idea in 2012, that we all live in fear of some great catastrophe.

And I think we go to the movies to have a catharsis. You know, we’re being told all the time that our planet is falling apart. And Roland’s fantasy is that in the face of catastrophe, people will come together. So he…dares to dream.

But this movie is like going on a roller coaster. Though I can’t anymore myself, I get sick! But it’s a controlled way of scaring yourself. So in a safe, controlled environment, you can really enjoy being scared. In a masochistic way!

Do you believe in the end of the world Mayan calendar prophecy?

AP: I couldn’t be more skeptical about it. I don’t believe it. I worry about the planet, but that date is the least of my worries.

What was it like working with John Cusack again?

AP: Well, at least we’re lovers in this movie, more than we’ve ever been allowed to be. So that was really fun. John is very special to me.

But yeah, this is our third time together. And every time I work together with him, I remember again how brilliant he is, and very rare. And he always had my back.

Like people will ask me, what’s so great about him? And I can’t ever explain it. I know he has this kind of vulnerability, this Tom Hanks everyman thing. Yet he’s more edgy. Yeah, he’s really special. He should have a lot of Oscars coming! Soon. Dammit!

How did it feel to get all emotional acting with a green screen and things not there at all?

AP: It felt gratuitous, indulgent, and probably fake! All things I was during this shoot! And I would be like wow, we really suck! But there were like tons of things Roland did where I went, he can’t do those thing.

And he does. He’s very bold. And his boldness pays off. Unike me! My boldness doesn’t pay off. My boldness is just embarrassing!

Does anything scare you?

AP: Yeah, I have a lot of fear living in New York City. I think more about that here, than in LA. I think in LA, you don’t feel as vulnerable because everything is spread out. But here, obviously because of 9/11 and how close we are together, it just feels more vulnerable.

But I can’t help it. And weirdly, most of the time I think about that on the subway. I mean, it’s not that weird. But I always say to myself, don’t stop taking the subway because of this shit. Get on the subway!

Do you find it hard to walk away from the emotionally crazy scenes you have to do?

AP: No. If you couldn’t come out of it, that would make you a…crazy person! And I have a daughter that I come home to every day, even shooting in Vancouver.

And she just wanted to read The Cat In The Hat, and stuff. So, it’s not like I can stay depressed and lugubrious about everything!

Do you ever think, how would I really react in a crisis situation like this?

AP: Yeah, I asked myself that all the time.

Well, what about the end of the world. Are you an optimist?

AP: Um…I really hope that people would come together. You know, I definitely feel that my generation just got a kick in the ass, with Obama. He’s my man. So I feel I woke up a little bit.

And I wasn’t here on 9/11, but I grew up here in NY. But you know, when you’re hated as much as we are around the world, it’s not the worst thing to be as charismatic and handsome, and have a sense of humor, as he has.

I was born and raised here. And my friends told me stories, and my mom was working the hotlines on 9/11. She’s a retired social worker, but she went and worked the hotlines. And all of a sudden, people came together.

And everybody was everybody’s neighbor. That’s a great thing. And hopefully, that’s the point of the movie. It’s Roland’s dream of how it would be, should something like that happen.

How do you react in moments of panic?

AP: Ha! Well, my husband always says that I would make a terrible general! Which actually isn’t that upsetting or disappointing for me to hear. Because I didn’t aspire to be a big general. But I guess I’m a pretty big panicker!

And what do you do when you panic?

AP: Pills! Yeah, I’m just not good at keeping cool in a difficult situation. And my husband is thankfully much cooler than I am. So…it’s a good thing he’s around!

AP: Because I was turning the pages really quickly. That’s always a good sign!

AP: When you’re trying to get through those pages, throughout the day. Or whatever.

Did being a mom yourself give you a better grasp of playing a mother in the movie?

You just kick in your love of children, and it doesn’t matter whether or not you’re a parent. I have lots of friends who aren’t parents, and they’re very maternal.

Did you learn anything about yourself while making 2012, and do you prefer doing a movie like this to comedy?

AP: I think if some genie came and said, you can have one wish, I’d probably want to do a comedy. Like a romantic comedy. You know, not just the usual wife roles, or some pitifully thin female role.

So I just want to be funny and dynamic and…all the things I wish I could be! But chemistry for that is really hard to come by. And, um…I forgot your first question!

What did you learn about yourself making this movie?

AP: What did I learn about myself…Ugh, I don’t know! I just hope that every time I work, I get a little better. And I don’t like to drop names, but Ben Stiller once told me that 98 percent of acting is relaxation. So I think that for those of us who have jitters performing, it’s good to keep working a lot.

AP: Are you asking me to sell my own movie! That’s cringe-y. Well look, if you like to go on roller coasters, then you’ll like this movie.

And I think awesome is a really good word to describe it. You know, Roland said this may be his last disaster movie, and it really felt like he is going for broke.

So if you really want to see a master of disaster in all his glory, this is probably the one to see. Yeah, I guess. Yeah. Was that a good answer?

Enjoy the rest of your bagel!