Delving Deep in the Heart of Texas

Born in Houston on August 9, 1980, Texas Battle earned his bachelor’s degree in kinesiology at the University of Texas before making his way to Hollywood to take a shot at showbiz. The former student-athlete made a memorable screen debut in 2005 opposite Samuel L. Jackson in the basketball bio-pic Coach Carter. He followed that performance with another just as impressive in Final Destination 3, a hit flick which opened at the #1 spot at the box office.

Since then, talented Texas has appeared in such motion pictures as Even Money and Wrong Turn 2, but he’s still probably best known for his series regular role on the TV soap opera “The Bold and the Beautiful,” where he joined the cast in late 2008 as the illegitimate son to one of the main families on the show. His other television credits include a recurring role on the hit CW series “One Tree Hill,” and guest-starring roles on shows such as “All of Us,” “The Bernie Mac Show,” “The Parkers” and “Committed.” 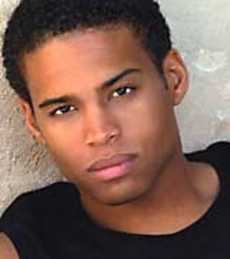 KW: Hi Texas, thanks again for the time.

TB: No problem, thanks for taking the time to interview me.

TB: What interested me in doing Dragonball was that it’s a huge comic book series that has built a great fan base and it’s a great action movie!

KW: Tell me a little about your character.

TB: My character’s name is Kerry Fuller. Kerry is a high school bully that attends the same high school as Goku. [played by Justin Chatwin]

TB: I drew a lot for the role of Kerry Fuller from my previous role in Final Destination 3 as Luis Romero. I felt they had similar character traits, so that helped me prepare. I also tried to pull from the comic books and how I felt Kerry fit into those.

KW: You’ve also been busy on TV in The Bold and The Beautiful. How do you like being in a soap opera?

TB: I like being on “The Bold and Beautiful” because the whole cast is like a family, we’re like brothers and sisters, and we feed off each other’s energy. Every day going to set is fun because of the great cast and crew that I get to work with.

KW: Do you get noticed a lot more because of the show?

TB: Now that I am on B&B I do get noticed a little more than I used to.

KW: How is working on a TV series different from making a movie?

TB: The difference in working on a TV series and a movie comes down to one thing for me, and that is the travel. With The Bold and the Beautiful, we are in one remote location, but with a movie you get to travel, explore, and experience different things everyday. But I’ve really enjoyed doing both.

TB: I am extremely happy at this point in my life. I have a great job, I have a very supportive family, and I’m loving life. I can honestly say I have no complaints.

TB: I live in the San Fernando Valley area.

TB: The last book I read was “Where the Red Fern Grows.”

TB: The only time I get afraid is when I am at the ocean. I get a little nervous when I’m in the water because I always feel like something is going to bite or snatch me.

TB: Wow, that’s a good question. I think I have been asked just about everything that I wish people would know.

Continue to support B&B, visit my MySpace page, and continue to send me feedback mail. And go see Dragonball!

KW: What was the biggest obstacle you had to overcome?

TB: The biggest obstacle I have ever had to overcome was moving from Texas to L.A, because of the change of pace. LA is such a different culture than anywhere else and it operates at a much faster tempo than Texas. Kind of gives you a culture shock when you first get here, but it’s a great city.

TB: The last time I had a good belly laugh was when I watched American Idol auditions this season.

TB: Right now I am listening to my favorite artist Avant’s CD.

TB: Will Smith, because he is a family man, well-rounded, and very well respected, and he just handles his business well.

TB: I am extremely ecstatic about the presidency of Barack Obama. I think he is paving the way for young African-American men like myself. I have very high expectations for Obama, and I am extremely hopeful that he will bring great lasting change not just to America, but to the entire world.

TB: My advice to anyone who wants to follow in my footsteps is stay focused, develop a thick skin and a positive attitude, and work hard at your craft every chance you get.

TB: Right now, at myspace.com/texasbattle, but they can look for my own website which is coming soon: www.texasbattle.com

TB: I answer all my fan mail. I make it my priority to respond to all my fans no matter what. Sometimes it takes me a while, when things get busy with work, but I still answer, because my fans are my support system and I am really thankful to them.

TB: I want to be remembered as a man who never forgot where he came from, stayed humble, and took on meaningful projects. I don’t want to forget all the people that helped me along the way, and how I got to where I am now.

KW: Thanks again for the interview, Texas, and best of luck with the movie and the TV show.

TB: Thank you for your time and consideration also. I look forward interviewing with you again!