Sharon Leal was born in Tucson, Arizona on October 17, 1972 to a Filipino mother and African-American father. A natural performer, Sharon started singing at the age of two, and attended Roosevelt High School of the Arts in Fresno, California. After graduation, she studied acting and voice while attending Diablo Valley Junior College.

The statuesque, 5’8″ beauty broke into showbiz on Broadway in both Rent and Miss Saigon and on TV in New York City as Dahlia on the daytime soap opera The Guiding Light. She later relocated to Hollywood where she appeared on such series as Boston Public, CSI: Miami and LAX before landing her breakout role in 2006 as Michelle Morris in Dreamgirls. 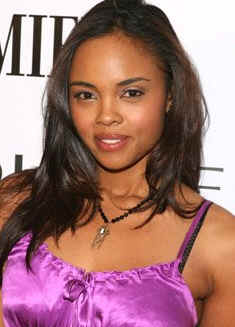 Sharon has already made five more movies since, including This Christmas and Tyler Perry’s Why Did I Get Married. Here, she shares her thoughts about her latest film, Soul Men, which co-stars Samuel L. Jackson, and the recently-deceased Bernie Mac and Isaac Hayes.

KW: Hi Sharon, thanks for giving me an opportunity to speak with you.

KW: What interested you in playing Cleo in Soul Men?

SL: I needed a job. [Laughs] No, it was a great, great prospect, because when I read the script it was very funny, and I heard that Sam Jackson and Bernie Mac were doing the film, I instantly gravitated towards it. So, it was a great score, and I’m happy to be a part of it.

KW: Sadly, two of your co-stars, Bernie Mac and Isaac Hayes, have passed away since the shooting.

SL: Obviously, with Bernie, it was so untimely and shocking. I think all of us were kind of in denial about the fact that the situation was serious because when he was on set with us, he was in great spirits and in good health. We were dancing and singing and working long hours. None of us really anticipated his condition degenerating to the point that it did. So, it was devastating and shocking to hear that he had passed. On the other hand, Isaac had been sick, but he was in good spirits as well. He had just suffered a stroke, so we knew he was vulnerable health-wise. Still, to have them both pass so close to each other, and to have them both be a part of the film, is very sad, and makes for a bittersweet opening for us. Although, speaking for Bernie, I know he would have really wanted it not to be a sad occasion, and he’d like nothing more than for us to celebrate his life. People are really going to enjoy his performance, since his character is so funny, so amazing, lovable and endearing.

KW: Do you have anything to say about what Jennifer Hudson, your co-star from Dreamgirls, is going through after the murder of her mother, brother and nephew?

SL: All I can say it is that it’s an unimaginable tragedy, and that my thoughts and prayers go out to her. I love her dearly. She’s an amazing girl. And I can’t imagine the kind of grief that she must be experiencing. So, I just send her good vibes and good thoughts and prayers.

KW: How was it being directed by Malcolm Lee?

SL: Malcolm is a great director and a lovely human being. He has great vision and is very clear and succinct about what he wants and needs.

KW: How comfortable were you with another role which called on you to sing like you had to do in Dreamgirls?

SL: I started out doing musical theater. My first professional gig was on Broadway. I was in Rent and in Miss Saigon. I went to a performing arts high school and did community theater. So, I’ve always sung. I’m just lucky that there’s a trend in film that they’re doing more musically-based projects, and I’ve benefited from their popularity right now.

KW: When did you get bitten by the acting bug?

SL: It kind of hit me early. I was painfully shy as a kid, but I felt right in my element onstage. So, it was something that I naturally gravitated towards, and was lucky enough to have outlets and venues to pursue it. I got my Broadway gig by going to an open casting call in San Francisco. They picked two girls, and it was a great excuse to get to New York, and I never really looked back. I’ve had a nice run since, and I hope it continues.

KW: You’re very exotic-looking. What box do you check off when you fill in the census?

SL: All of the above. I remember it was always very confusing filling it out. My mother’s from the Philippines and my father’s African-American. So, I have a little mixture going on.

KW: Being mixed, how do you feel about Barack Obama?

SL: Historically, it’s unprecedented, having the first African-American president. It’s very exciting for him to be the face of this country, and to feel an affinity for and a connection to a President who looks like you. That’s pretty amazing!

SL: That’s a great question to ask. Yeah, I am. With the way this business is, with all the competition and just the level of instability, we’re forced to ask ourselves that question, because you experience so much uncertainty, just being in the industry. You couldn’t really do it, unless the love you had for it was really strong, and the passion was really there. The passion has never really left me. I think with every job it’s impossible not to be happy, because you know how difficult it is to keep a momentum going, to be fulfilled, to be challenged by different roles, and to just work consistently. The fact that I’ve been able to do that for a couple of years is a pretty big achievement. And as hard as I am on myself, I can sit here and really appreciate it. So, yes, professionally, I’m very fulfilled by what I do. It’s a challenge to stay focused and to stay positive and to go out of your way to stay happy by being appreciative. Bernie Mac was a great teacher in this regard. We had a lot of conversations where he reminded me exactly what it meant to stay grounded and to never forget where you come from and how lucky we are to do what we dreamed of doing when we were kids. Yes, I’m happy and I feel very blessed.

KW: You were in a movie with Columbus Short, weren’t you?

KW: And Tasha Smith, who you were also in a movie with, Why Did I Get Married, asks: Are you ever afraid?

SL: Hmm – [Chuckles] Yes, I mean I don’t think you could be a human being and not feel some trepidation. But I think it all falls in line with your perspective and how you handle the unknown. This industry really preps you and trains you for survival mode. It’s a perseverance game, and a faith game. It’s really about seeing the light, not getting discouraged, and believing. It’s about keeping the faith. You expect great things to happen and hopefully they will. That’s the way I try to approach this business. It’s about facing fear head on and pushing through it. That’s how great things happen.

KW: Bookworm Troy Johnson, who you were not in a movie with, asks: What was the last book you read?

SL: I’m into biographies. I just finished a very popular one called Eat, Pray, Love: One Woman’s Search for Everything across Italy, India and Indonesia by Elizabeth Gilbert. And I just started a biography of Ava Gardner by Lee Server called Love Is Nothing. I’ve always been sort of fascinated by her.

KW: Music maven Heather Covington who you might be in a movie with one day asks: What’s music are you listening to nowadays?

SL: My appreciation of music is pretty broad, so I’ve got an eclectic mixture of stuff going on: Maroon 5, Stevie Wonder, the new Robin Thicke and an old Tori Amos album. Depending on my mood, it’s always shifting across the board.

SL: I think that “Are you happy?” was pretty good.

KW: How do you balance being a wife and mother of a 7 year-old with being an actress?

SL: I’m not the first to do it. I’m definitely inspired by other women who have been able to do it. It’s an unconventional way of being a mom, but if it means coming home as often as you can, you do what you have to do to make it work.

SL: I just want to be known for good work. I’m not necessarily that interested in celebrity per se. I hope that people get the sense that I love what I do.

KW: Well, Sharon, thanks again for the interview. I’ve been very impressed by your intelligence and sophistication.

SL: I appreciate it. Thanks, Kam.

To see a trailer for Soul Men,