Born in Winchester, Virginia on May 10, 1958, Rick Santorum is ever the advocate for families, freedom, the United States and faith. The former Senator from Pennsylvania spent last year as a candidate for the Republican nomination for President of the United States.

A grassroots approach to campaigning catapulted him to frontrunner status, as he won 11 states and over 4 million votes during the primary season. Earlier in his political career, prior to serving in the U.S. Senate from 1995 to 2007, Rick served in the U.S. House of Representatives from 1991 to 1995.

He is also the author of a couple of New York Times best-sellers, “American Patriots” and “It Takes a Family.” Rick and his wife of 23 years, Karen, are the parents of seven wonderful children: Elizabeth, John, Daniel, Sarah Maria, Peter, Patrick and Isabella. 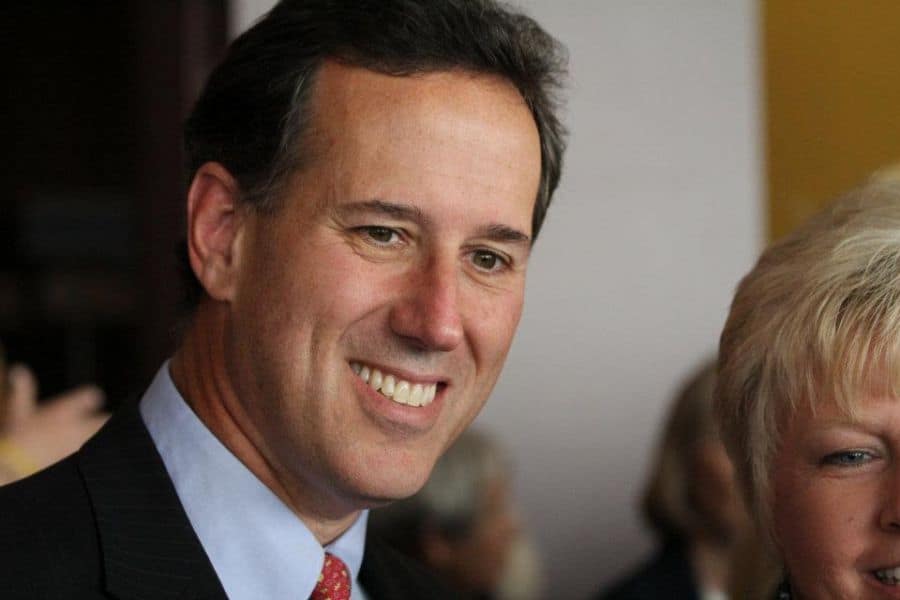 Senator Santorum recently spoke with me about taking the reins of EchoLight Studios, as CEO of the first vertically-integrated Christian movie studio to offer production financing, marketing and distribution across all releasing platforms.

Rick Santorum: Hi, Kam. It’s very kind of you to take my call.

KW: How is your daughter Bella, and the rest of the family?

RS: Thank you so much for asking. She is doing fabulously. She’s had a tremendous year since the campaign ended, and has been healthy, so I just feel like we’ve been extraordinarily blessed. Thanks again for asking. I have to tell you, that is the most common question I get when I talk to people. It’s very heartwarming for a dad who is very proud of his little girl.

KW: Great! I’m happy to hear she’s doing well. So, what interested you in EchoLight Studios?

RS: I’ve always been interested in the idea of culture-shaping institutions, and film is obviously a huge shaper of the culture. I’ve long felt that folks who share my value structure have not done a very good job at getting involved in that space and creating content. When a friend of mine who is an investor in this company came to me and said, “Hey, I want to show you what I’m up to,” I got interested in it. And over the course of 8 or 9 months I got more and more involved to the point where I decided that it would be a good use of my time and energy to work with a unique company that is really structured like no other in the industry. It’s a vertically-integrated film company which not only has the money to develop and produce films, but has the capability to distribute them everywhere down the line, from theatrically to DVDs. It’s a full-service movie studio, and we’re very excited about it.

KW: Does it seem to you that a certain secular political correctness has become the state religion which is backing people of faith into a corner where they no longer feel free to express their views without serious repercussions? Look at the blowback Chik-fil-A encountered when one of its executives cited the Bible in objecting to gay marriage.

RS: You hear a lot about diversity from folks on the left, but diversity only seems to include things they want to talk about. Chik-fil-A is a great example. But on a whole variety of fronts you’re sort of ostracized if you don’t stand by the orthodox liberal point-of-view that the media seem to adhere to. You see this in a lot in films, too. I could cite example after example where they strip out controversial material because it mentions God or Jesus or faith or some moral teachings. It’s really sad that you can’t have real-life depictions of how people of faith live their lives, and have that reflected in movies without accusations like, “You’re a theocrat! You’re trying to preach to us.” No, this is how people live their lives. The sad part is that what Hollywood has done is sort of scrub faith out of the picture. It sanitizes any mention of God or faith or Christ.

KW: But what about The Bible miniseries which was such a hit on TV recently?

RS: A Biblical epic is another thing. That’s okay with them, because it’s just a Bible story. But if you’re interested in talking about how faith really works in people’s lives, and want try to tell that story grittily, truthfully and authentically, that’s missing. That’s a missing component in large part because of political correctness and a desire to appeal to a broader audience. Well, they don’t seem to worry about appealing to a broader audience when they promote other values inconsistent with where most of America is. They have no problem putting edgy stuff in movies that they know aren’t agreed to by most of the American public. But when it comes to faith-oriented fare, they stay way far away from it. So, what I hope to do with these faith and family films is to show faith in its authentic form. I don’t want to be pastor-in-chief. I don’t want to preach to anybody. A lot of our movies are going to be true stories, and we’re going to show the role of faith as it really is. And hopefully, it will feel natural and not forced. That’s what we have to do. We have to produce quality content. No one wants to see poorly-scripted, poorly-made, poorly-acted Christian content. We need to produce high-quality, compelling stories that have a heart.

KW: Why is it that Congress can open each session with a prayer, yet it’s forbidden to do the same thing in public schools? It seems that we’ve ushered God out of most of the public square.

RS: That’s true and, to me, it’s really a violation of what our Constitution says, and of what is essential for a good and decent society. A good and decent society allows everyone access to the public square, whether I agree with them or not. Sadly, someone who has a moral point-of-view that is informed by, say Friedrich Nietzsche [who pronounced “God is dead!’], has the right to advance their beliefs in the public square, while someone whose morality is informed by Jesus Christ can’t. They’re supposedly bad. What makes Nietzsche more legitimate under the Constitution than Christ? Nothing. The whole idea of the Constitution was to let people of faith as well as those of no faith have their voices heard and respected. I don’t vilify people because I disagree with them. I don’t assume they’re bigots or haters, but that’s the way people of faith are depicted now, when in the public square.

KW: What did you think of President Obama’s recent statement about parochial schools he made while in Ireland?

RS: Sorry, Kam, I haven’t heard it. We’ve been on vacation, and I deliberately tuned out while away. I apologize.

KW: He basically dissed religious schools, saying they encourage division. As a product of Catholic schools, I was shocked, especially since they have done such a great job serving inner-city communities with poor public schools.

RS: That wouldn’t surprise me, but I’m not in a position to comment on it.

KW: Well, when you’re up to speed, I hope we can chat again about this and some of the other issues of the day. Meanwhile, thanks for the time, Senator, and I look forward to reviewing the pictures you produce as CEO of EchoLight Studio.

RS: That sounds great. Thanks, Kam.

To order a copy of “American Patriots,” visit:

To order a copy of “It Takes a Family,” visit: